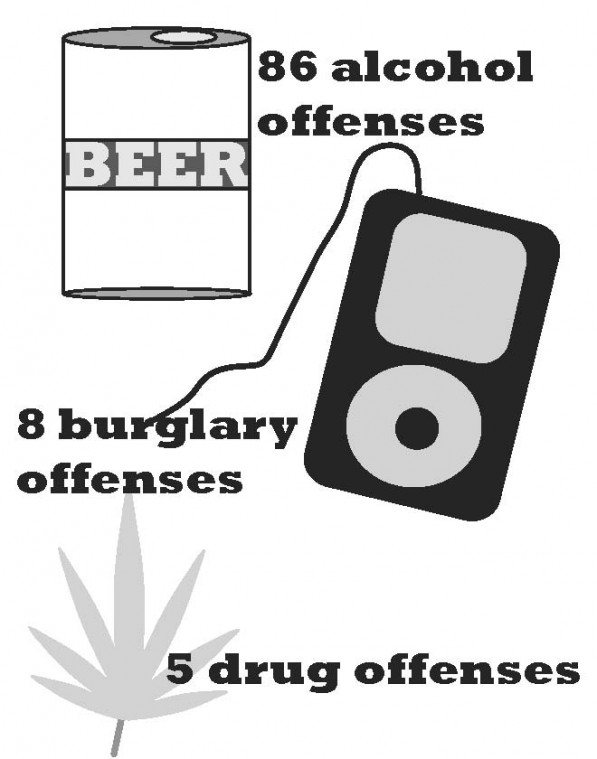 Even with the occasional scare on campus, statistics show that Simpson security concerns remain low.

Director of Security Chris Frerichs released the results from the Annual Security Report to faculty and students late last month.

“Simpson has always been a very safe campus,” said junior Gaston Akerman, president of criminal justice club as well as a safety programming undergraduate assistant for Simpson Security, said. “As many other colleges nationwide, Simpson has little property crime and we’d rather have that kind of crime instead of crimes against victims.”

The Crime Report Statistics, which can be found on the security portion of Simpson’s website, show the college’s low crime rate against victims very well.

According to the security statistics, in 2009, the crime with the highest number of offenses was on-campus liquor law violations referred for disciplinary actions with 86 offenses. There were 34 fewer offenses from the previous year.

The two other violations with the highest numbers were burglary with eight offenses in 2009 and drug law violations referred for disciplinary action with five offenses.

The West Des Moines campus only reported one burglary.

The report is released in accordance to the Jeanne Clery Disclosure of Campus Security Policy and Campus Crime Statistics Act. According to the act, which is enforced by the U.S. Department of Education, Simpson Security officials are required to disclose information about all crime reported to it and to the school, as well as around or off campus while protecting the names of the criminals.

“The Clery Act is named after the 19-yearold (Lehigh University) freshman Jeanne Ann Clery who was raped and murdered while asleep in her residence hall room in spring of 1986,” Frerichs said. “Jeanne’s parents discovered that students hadn’t been told about the violent crimes on the school’s campus in the three years before her murder. They joined with other campus crime victims and persuaded Congress to enact this law.”

Simpson strives to maintain a safe campus environment for students and faculty. This is accomplished with efforts to work closely with students in hopes of voicing their opinions.

“We are making efforts to raise the students’ voices so we can fix problems in the most efficient and effective manner,” Akerman said. “An online comment box has been created and recently published for any suggestion, complaint or comment that a student, faculty or staff member might have.”

“I feel like Simpson has made a strong effort to address all issues that may come up with students and professors,” Gerhardt said. “There is an emergency safety plan, and everyone knows about it because professors are required to address it at the beginning of each semester in their syllabus. I also feel like the school’s policies are fair and just, and anyone who feels differently are those who don’t take responsibility for their own actions.”

Frerichs urges students to contact security with any concerns.

“Overall violence is something to be concerned about,” Frerichs said. “As a part of the Simpson community, everyone has a role to play in the safety and security of our campus. If there are any issues or concerns please feel free to contact Campus Security at extenstion 1711.”