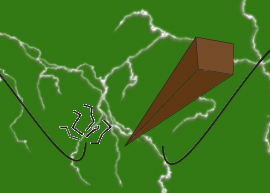 As tent spikes were being driven into the ground behind Hillman Hall on Friday, Oct. 1 for the Homecoming tailgate tent, one spike became the culprit of a soon-to-be power outage in Hillman and McNeill Halls. The darkened hallways and cancelled classes left some people wondering who should be held responsible.

Rich Ramos, assistant dean for student activities, arrived to the scene soon after the incident occurred.

“Basically what I know is the electrical outage was caused when the people who were putting up the tent for Homecoming drove one of their four foot long spikes into a main power line coming into campus,” Ramos said.

“Those individuals that were hired to put the tent up turned around and drove some steel stakes right through the primary feed that fed Hillman Hall and McNeill Hall,” Miller said.

Kelley Bradder, vice president for information services and chief information officer, clarified how two cables were damaged when only one cable had been struck originally.

“Subsequently, another line was damaged by the heat generated by severing the first power line,” Bradder said.

Within three hours, IMU repaired the two cables that were damaged from the stakes.

One fortunate event did come out of this matter.

“This could have been pretty close to being a tragedy,” Miller said. “Somebody could have seriously been injured or killed. It’s a high voltage cable, and they’re pretty unforgiving.”

Precautions were taken to prevent this kind of incident from taking place. However, somebody did hit one of the lines.

“Apparently, some of the main power lines didn’t get marked as they probably should have because apparently what was marked by the city was that there was one line,” Ramos said.

Miller explained the reasoning for not having every cable line marked.

“There’s a problem with the locating of separate individual cables within a proximity to one another,” Miller said. “Those cables, once they get so close together, virtually become impossible to distinguish between one or the other.”

According to Bradder, after, all of the network problems that followed – they were resolved shortly after.

“At this time, all buildings have wireless access restored and all reported problems have been addressed,” Bradder said.