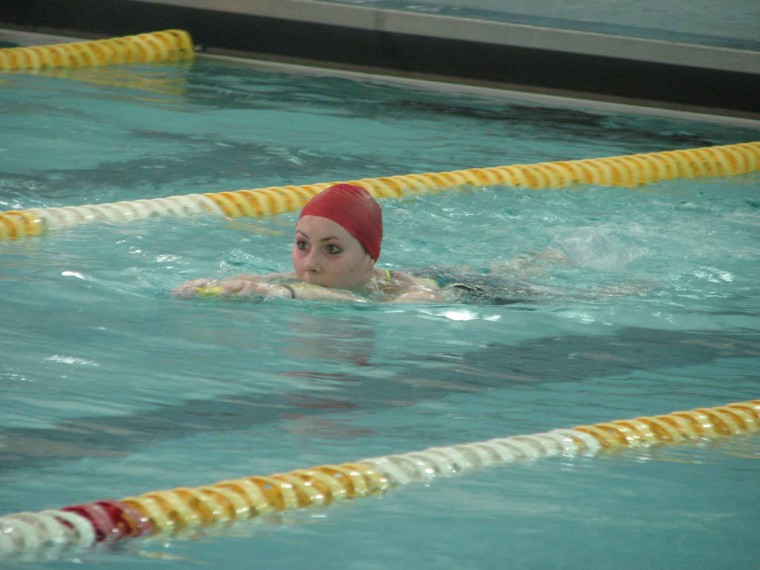 Simpson’s swimming team started intense practices a few weeks ago in hope to strengthen the small team’s success for this year.

Although the team is very small, that doesn’t stop them from being mighty.

“We won three or four meets last year and would like to continue this going this year,” said head coach Aaron Strain. “The conference is looking good this year, but it looks tough.”

A majority of the swimmers are sophomores.

“Everyone is working and excited about the season,” Strain said.

Strain says the swimmers have been working very hard during practices to achieve their individual goals as well as the goals for the team.

Individual goals tend to be similar with each swimmer hoping to shorten their time and beat a few records, but the team goals are a little different.

“A team goal is to just have a good time and do our best,” said Sophomore Keely Goshia.

There are a large number of strengths for the entire team.

“Our strength is that we have all been in swim meets so we know what it’s like to be under pressure,” Junior Catherine Mayes said.

Sophomore Anna Aldridge feels the strength of the small team relies on the close relationship they share.

“Our small team’s strength is that we are all pretty close, so we all have a bond with one another,” Aldridge said.

There’s a common understanding that a weakness of the team is the small number of members it has.

Strain thinks there is only one thing to worry about as a team.

“We are a very well balanced team, but there isn’t one spot to worry about at the top, so that would be our weakness,” Strain said.

Many of the members have been swimming competitively since they were very young.

“I have been swimming competitively since I was six years old,” Mayes said. “My favorite thing about swimming is meeting new people and just having fun.”

Aldridge finds her eating habits topping her list of favorites.

“My favorite thing about swimming is that I can eat as much as I want, and I won’t ever gain a pound,” Aldridge said. “My stomach is so stretched out by the end of season that it’s hard to cut back eating when I’m done swimming for a while.”

An audience is something that is lacking at swim meets.

Mayes thinks students should try attending the meets for a change in scenery.

“I would encourage students to come watch a swim meet because it is unlike other sports and it is competitive without being physical with the other teams,” Mayes said. “Swimming is a difficult sport which some people don’t realize until they watch someone compete.”

Goshia believes having better audience would help her performance.

“Cheer for us, it really helps,” Goshia said. “I swim better with people yelling for me.”

The next home meet takes place Saturday, Nov. 20th. Come out and support your fellow classmates.