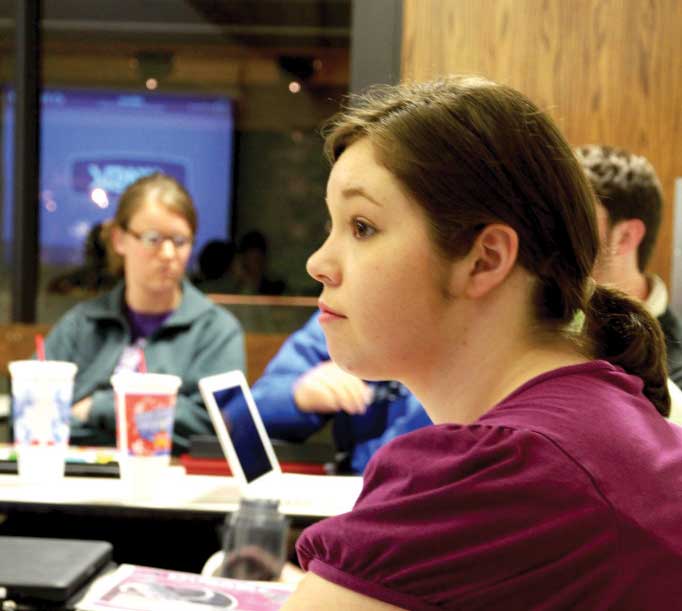 Creating a new structure to help use the Student Government Association’s (SGA) $44,000 may become a reality.

SGA’s idea of building an outdoor classroom is still being tossed around.

“It was generated, I believe sometime earlier on this year,” Ramsey said.

The idea for the outdoor classroom came up when trying to decide how to spend SGA’s $44,000 budget.

“We were looking at our very large budget this year, which has been an issue that the whole campus has heard about,” Ramsey said. “And we were looking at ways that we can further better the Simpson experience, and this is one of the things that came up as a possibility.”

The cost of the potential classroom hasn’t been set in stone, but junior Joe Sorenson has a rough estimate.

“After talking with Jeff Wagner from physical plant things like this (won’t be) an extremely expensive project,” Sorenson said. “(It will cost) between 10 and 15 grand.”

SGA can cover the cost with no problem. Sorenson said SGA wants to use this year’s budget entirely before getting a new budget next year.

Though the cost isn’t an issue, there is still some debate as to where the classroom could be established.

Some people may have cause for concern in regards to how weather would affect the using the space.

Rich Ramos, assistant dean for student activities, while in favor of building the outdoor classroom, is able to see how weather would be a key player in being able to use it or not.

“I think the only negative response I’ve heard at this point is, ‘well you know you’re really limited by using it in the spring, in the fall, and in the summer,'” Ramos said. “We’re not the only college in Iowa that would have an outdoor space.”

“We don’t want to spend this money and have it not be used,” Sorenson said.

Though there are some negatives, positives exist as well.

The potential outdoor classroom could be beneficial on sunny days for people who may like to have a different place to sit outside.

“In the times when I’m walking across campus, especially on like a spring day or a beautiful fall day, there are always people sitting outside,” Ramos said. “And they are sitting on the ground.”

Because of the different ways to use the outdoor classroom, Ramos is pulling for it.

“I think it’s a really cool idea,” Ramos said. “It’s one of those things that we clearly don’t have on campus.”

“We’ve emailed professors and are having really good feedback from them,” Sorenson said. “At least 20 to 30 professors emailed us back saying they would like to see it.”

Only time will tell if SGA’s idea to build an outdoor classroom is approved.