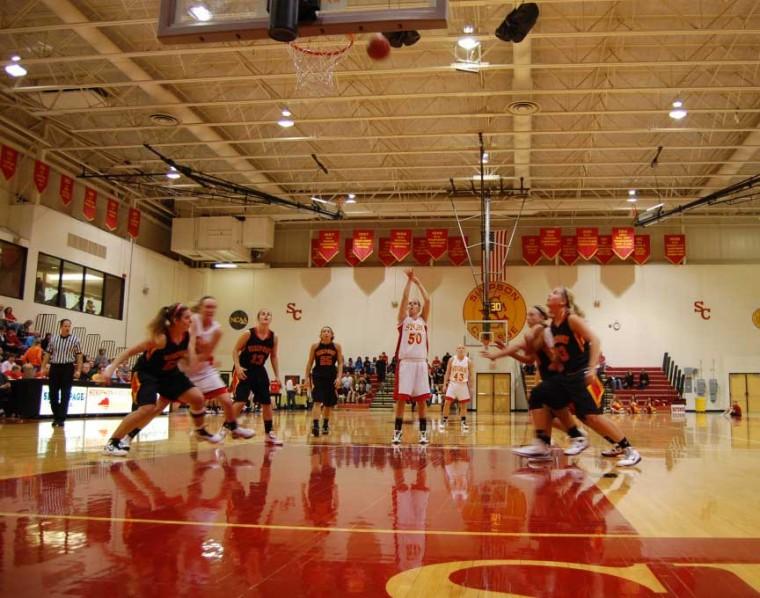 The goal was to raise excitement and team spirit for the upcoming basketball seasons. Fans, family and students packed the gym to watch the teams participate in scrimmages, contests and live entertainment.

Instead of the typical Red and Gold scrimmage, the men’s and women’s basketball coaches wanted to create an event and atmosphere that would get the whole campus involved. Head men’s coach Charles Zanders had some vision behind the creation of this event.

“We had several ideas coming together from all the coaches, but ultimately we wanted something that was interactive and welcoming,” Zanders said.

In addition to having an intersquad scrimmage, the players got to choose faculty or staff members to serve as honorary coaches. Jan Everhart, assistant professor of religion, and Barb Ramos, assistant professor of education, served as coaches for the women’s black and white squads. On the men’s side, campus Chaplain Fritz Wehrenburg, and Head Football Coach Jim Glogowski sat on the benches and contributed to locker room pep talks with their titles of honorary team coaches.

The matches started with tip off at 6 p.m. All players got a chance to showcase their skills on the floor before declaring the white team the winner.

The halftime show also included a three point shoot out contest, where a male and a female player would be one team competing against two other teams. There was a tie, with senior Amy Hamilton and junior Zac Barrigan, and junior Mindy Hutchcroft and senior David Fouch.

Another element of the halftime show was the dunking contest. Participants showed their dunking abilities and the crowd voted on who their favorite player. The finalists came down to sophomore John Cord and senior Stefon Brown, before Brown took the overall crown.

The second part of the scrimmage highlighted the men’s basketball team and their progress.

The white and black teams battled for the second half before victory went to the black team.

There was also a post-scrimmage social at the Sports Page as a way for students, fans and parents of the players to interact and meet each other.

“We wanted to have a way to say thank you to the parents for their support but also allow players and fans to socialize more,” said Brian Niemuth, head women’s basketball coach. “As this event and the program grows, we want to make this into something that will gain interests from the campus community.”

The first annual Hoopapalooza seems to have been a success from both the coaches and the players. Junior Ali Sokol feels that the event supplemented the excitement that the team has for the upcoming season.

“I think Hoopapalooza turned out really well,” Sokol said. “It was a lot of fun, and it was a great way to kick off the season. Hopefully, it got the fans excited to watch Simpson basketball.”