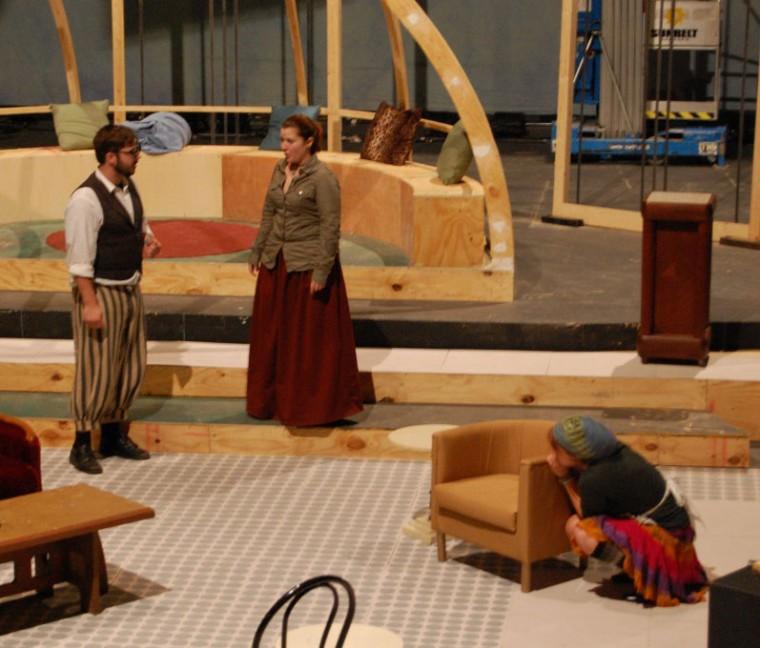 Bringing the suffrage of women to center stage, “Learned Ladies” explores the complex layers of feminine enlightenment, and it’s predicted to produce laughter and entertainment.

French playwright Moliere wrote the poetic lines to be recited in couplets, meaning every two lines rhyme. Reciting the lines becomes a challenge of not sounding like a Dr. Seuss performance, but rather a comedic French play.

“What makes his plays so difficult is that his plays are very funny, but they’re also loaded with a lot of social, political, ironic comedy,” said Tom Woldt, professor and chair of the department of theater arts.

A passion for female enlightenment is expressed by Philamente, one of the leading female roles played by junior Samantha Aaron.

“I’m not a mother, I don’t have two kids, I don’t live in 1920, but there are certain aspects of her personality that I see in myself,” Aaron said.

Philamente strives to educate everyone around her, including the servants in her household, through writing and literature. Her endeavors establish a moral theme for the play.

“It’s OK to be educated, but you can’t lose sight of yourself,” said Katie Rooney, senior and stage manager.

Philamente’s exaggerated personality and interest in purchasing frivolous things work together to mold a character of the 1920s that exhibits qualities relatable to modern times. Aaron can relate to the habits of Philamente when it comes to shopping.

“For her it’s a telescope, for me it’s shoes,” Aaron said.

There are love triangles, a con artist and a provocative lust for life. The contrasting personalities between the characters create an atmosphere bound for comedic conflict and organized chaos.

“The challenge is to make it work in the way that it is intended to, which is to heighten the language for dramatic purposes, and also to help further clarify how clever these characters think they are,” Woldt said.

The costumes, props and set design all reflect the era and style of that time. Freelance set designer, Amber Miller, originally from the twin cities, is working behind the scenes of “Learned Ladies.”

Woldt was first introduced to Miller’s artistic designs while working with professional companies in Minnesota and Michigan last spring.

“I think it’s exciting given the nature of the play to have a woman coming in as a set designer, because in the area of scene design and technical production, women are very much the minority,” Woldt said.

Her use of bold colors and curved lines reflect art deco, a popular style of the 1920s.

“It’s a very provocative time visually, so it makes a very interesting provocative image for the play,” Woldt said.

The provocative visuals of the stage and frivolous Philamente will hit center stage on Nov. 19-21. The play will begin at 7:30 p.m. on Friday and Saturday, and 1:30 p.m. on Sunday in Pote Theatre.

“I hope that people will come and see what a delightful and interesting story this is,” Woldt said. “[It’s] about women seeking enlightenment for themselves.”