Iowa Students Are No. 4 in College Debt Ranking 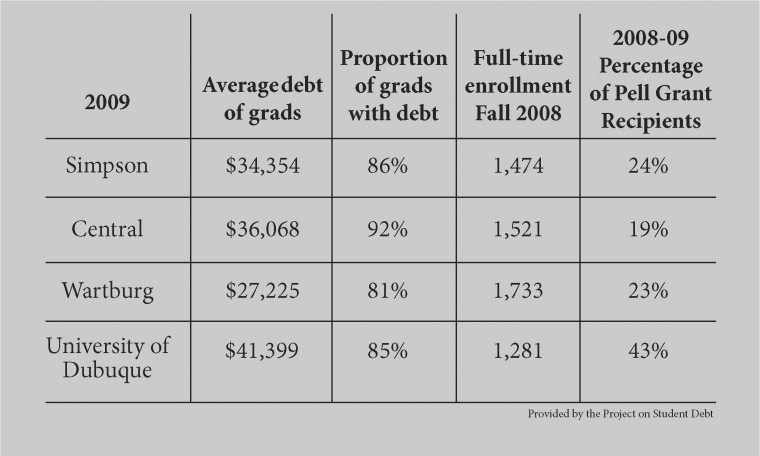 Thousands of dollars worth of debt doesn’t mean much to graduating high school students as they look at colleges, but when that final semester rolls around students feel differently when they look at the loan statement.

According to the Project on Student Debt, students a part of the graduating college class of 2009 owed an average of $24,000 nationally when they graduated. Those same students were also facing an unemployment rate of 8.7 percent.

“In reality there is a big problem with what students are being asked to contribute towards their education and the fact that families are very largely and grossly underprepared for that commitment,” said Tracie Pavon, assistant vice president and director of financial assistance.

According to the data sheet provided by the Project on Student Debt, the college class of 2009 from the state of Iowa owed around $26,000, which ranked No. 4 in the country.

“(Some families) haven’t participated in college savings plans,” Pavon said. “They aren’t able to, or they aren’t choosing to, or they’re making other decisions – so it leaves a gap for students.”

On top of that, students who graduated from private colleges in Iowa in 2009 found themselves in the No. 2 rank nationally – owing more than $32,000 – only behind Rhode Island.

Some students at Simpson are not worried about their financial situation. Senior Miles Swenson said his mom also attended Simpson, so being a legacy student helped him out.

“Simpson offered me about the same as other schools,” Swenson said. “I don’t think I’ll graduate owing any money since my parents saved up for a long time.”

Pavon said that Simpson offers a number of loans to help alleviate financial pressure on families.

“Simpson doesn’t have a large number of students who are footing the bill themselves 100 percent,” Pavon said. “Students are getting some type of scholarship or grant to come to Simpson and we’re shouldering a large portion of that trying to help students.”

Freshman Bri Stadlander said if everything goes well, she will only owe $4,000 after graduation.

“I have a community service scholarship, pre-ministerial loan and a Simpson College grant,” Stradlander said.

The report, Student Debt and the Class of 2009, also stated that 74 percent of Iowa students that graduated college in 2009 were in debt. That places Iowa in the No. 2 category again, only behind South Dakota.

Pavon said that if a student falls into financial trouble after graduation, there are options available to them.

“The main thing is to keep your lender informed because a lot of times there are things the lender can do for you,” Pavon said. “There’s all kinds of things you can ask for and can have granted in your repayment, but if you don’t know the type of lender – you can go into default.”

Pavon said that any students with questions should contact the Financial Aid Office and they would be more than willing to help with concerns.