Collecting Food for the Needy 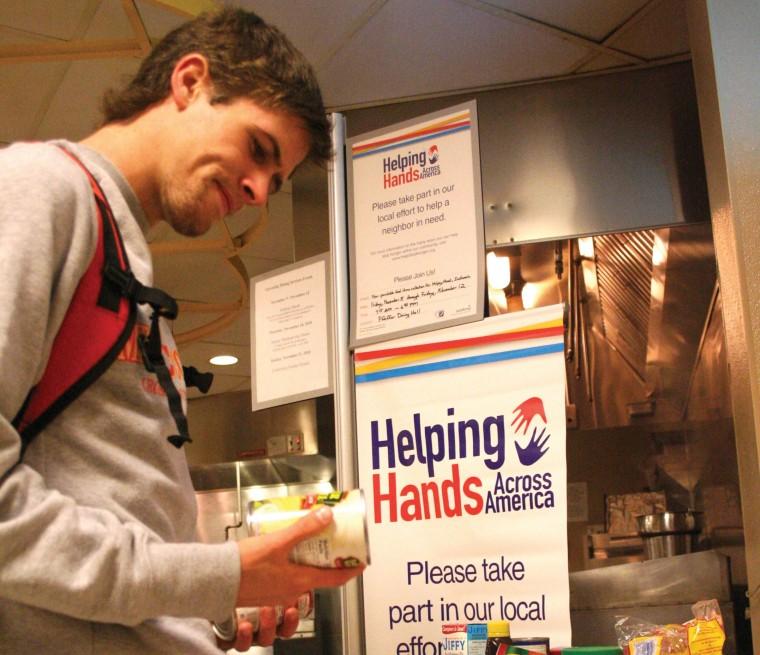 With winter swiftly approaching and the holidays coming around, the Simpson community activated its do-good spirit to put food on the tables for families in need.

From Nov. 5 through Nov. 12, Sodexo, Simpson’s food service provider, encouraged students to drop off non-perishable food items, as part of the company’s nationwide STOP hunger initiative. The drive brought in a little over 100 pounds of non-perishable food, to be donated to Helping Hand, one of Indianola’s local food banks.

“One of our goals is to be part of the community and to give back,” Blair Stairs, general manager of Simpson Dining Services, said. “We’re working to relieve hunger and to end it.”

To help meet that goal, Simpson Dining Services maintains a long-standing relationship with Helping Hand. Many times throughout the year, including winter, spring and summer breaks, Stairs donates leftover food items to the food bank.

“I’ve always worked with Helping Hand and they’ve been a great bunch of people to work with,” Stairs said.

The food bank, which began serving the Indianola community in 1982, offers seven day supplies of food to Warren County residents with a referral. Also, residents can obtain donated clothing at no cost.

Lately, the number of families requesting food has been on the rise, according to the organization’s treasurer Reva Trembly.

“I had 11 families come in yesterday,” Trembly said last Wednesday. “The highest number of people in a family was eight.”

Although the can drive ended on Nov. 12, opportunities to donate through Simpson’s Dining Services will continue. On Sunday, November 21, community members attending Simpson’s community brunch will receive a dollar off their meal if they donate an item.

“We are trying to collect as much as we can for the community,” Stairs said.

In addition to Dining Services, other campus organizations are involved in similar projects. Members of Simpson College’s Students in Free Enterprise (SIFE) have set a lofty goal for food collection.

“Campbell’s (soup) comes out with their annual ‘Lets Can Hunger’ project and SIFE globally partners with them,” said Bryce Davis, junior and project lead. “Each team pledges to collect 5,000 pounds of non-perishable food items and then those items can be donated to whoever that team wishes.”

For on campus collection, SIFE students and RLC plan on working together to divide the collected cans between multiple charities. SIFE, however, also collected door-to-door on four streets in Indianola and raised 200 pounds of food thus far.

SIFE may not often be thought of as a community service group, but for Davis, the intention to serve lies in the very definition of the group.

“SIFE, by definition, (is) college students, university students and business leaders coming together to improve the world through the positive power of business,” Davis said. “We’re using entrepreneurial efforts, marketing tactics and networking to overall gain 5,000 pounds which will go to those in need.”

As one can drive ends more opportunities arise. But no matter the charitable cause, the reason always remains the same.

“It’s basically awareness and empowerment that people can make a difference,” Davis said.