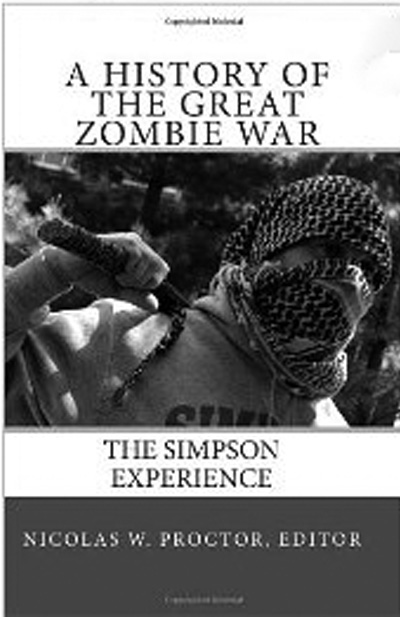 Zombies have wandered off of Simpson’s campus and into the literature of Amazon.com.

Students in a May term class last spring had the opportunity to compose a book and experience writing with the intentions of being published. “The Great Zombie War: The Simpson Experience” is a product of the collaborating minds of Simpson students.

While composing creative stories of the interactions between zombies and their victims, each component of the plaguing disease was planned and underwent a critical process.

In the class, students diagnosed the spreading disease as HIV-Z. “The Great Zombie War” was under the direction of Chair of History and Professor Nicolas Proctor.

“Zombies gave me the content for a project-based class,” Proctor said. “They wanted it to be semi-scientifically plausible.”

The design, function and symptoms of the disease were developed by biology, chemistry and forensics majors in the class.

“We broke up into action groups of four to five people that would discuss a particular aspect of the book,” junior Luke Riesselman said.

Riesselman led a group of students while constructing the material for chapter seven of “A History of the Great Zombie War: The Simpson Experience.” Riesselman enjoyed the experience of writing and collaborating ideas with fellow peers. The topic of zombies attracted consistent discussion in the classroom.

“Since the topic was about zombies, people weren’t really afraid to say what they thought about it,” Riesselman said.

The book explores the trek of the disease as it invades humankind. Stories of the epic assault of zombies was described through e-mails, religious sermons, chat messages and journal entries written from the original ideas of each student partaking in the May term class.

The course of writing a book over a span of three weeks was a lengthy process and required creative hard work, determination and team work.

“Simply, it was a lot of hard work, but thanks to the great effort everyone put in and the guidance of Dr. Proctor, we were able to develop and publish a future best seller,” junior Antonio Reyes said.

Working in collaborative groups allowed the students to become familiar with multiple styles of writing as well as the art of editing and peer review.

“I enjoyed the process, and I think even if we hadn’t been published it I still would have been proud to have worked on it,” Reisselman said.

“A History of the Great Zombie War: The Simpson Experience” is available for purchase at Amazon.com, as well as Cup o Kryptonite, a book store located on Fleur Street in Des Moines. All proceeds are equally distributed to each member of the writing staff.