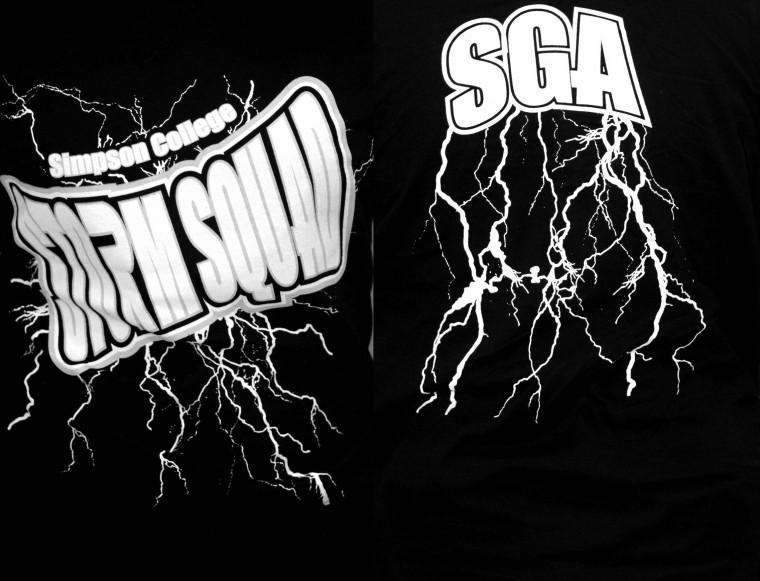 The Student Government Association (SGA) allotted Storm Squad –– a group started by the Student Affairs Committee –– $2,100 to purchase a $40 banner and T-shirts that would be given to students for free at the game.

The Student Affairs Committee, which “handles different activities for students through SGA” wants Storm Squad to “become a culture” at Simpson according to Joe Sorenson, junior senator and member of the committee.

“We wanted to create a (livelier) student section,” Sorenson said. “So kind of like the Drake Bulldogs have a Doghouse and Hawkeyes have the Hawk Nest, we want to create a more supportive campus for the different groups that were out there. A good way to start was at basketball games.”

The hope of the Student Affairs Committee (SAC) is that Storm Squad can continue at sporting, theatrical and academic events, however they have yet to figure out how this would occur, Sorenson said.

Storm Squad wanted to “better the Simpson experience for students,” said senior Steven Ramsey, who is also a member of the SAC.

However, not everyone agrees with Ramsey.

“SGA is not the (group) who should try to revive school spirit,” Junior Matt Stone said, founder of Sports Management Club (SMC). “When it comes down to it, school spirit is not something that can be fostered by giving out free T-shirts. SGA allocated themselves an absurd amount of money to sponsor this one night even that in the end – in my mind – was not successful.”

Assistant Dean of Students Rich Ramos said that there have been many groups like Storm Squad at Simpson.

“Once the culture has been built up, those incentives (free T-shirts) don’t necessarily have to be there because people are already excited to be there or go to the event,” Ramos said.

Junior Tracy Sibbel liked that the shirts got student to “show up.”

“I do not have a problem with SGA funding T-shirts to be given out at the basketball games,” Sibbel said. “I think most people on campus can tell you that the school spirit –– particularly among students –– is lacking.”

Junior Colton Calvert agreed with Sibbel that the shirts could build school spirit.

“I thought the shirts were really cool even though they were not school colors,” Calvert said. “I just think we should have things like this happen more often because from my perspective as an athlete here at Simpson, it gives me a boost when I see the support.”

Other students, however, said the money given to Storm Squad could have been used in other ways.

“I think that the goal of reviving school spirit is a worthy one, but they could have invested $2,100 in a way that had bigger and long-term benefits,” senior Blake Shultice said. “Giving out free T-shirts at a game might revive school spirit to an extent, but only temporarily. I think $2,100 could have been invested in a way that would have a more permanent effect.”

Senior Paul Scaletta agreed that SGA could have used the money in a better way.

“I haven’t had a whole lot of time to have a deep opinion about it, but to me school spirit doesn’t seem like something that can be bought,” Scaletta said. “First, a team has to be good for people to get excited about them. That’s Simpson men’s team’s first problem. But bottom line: no one is cheering for a loser….Use the money for something more important like a parking lot, where I don’t get a ticket everyday! Plus, tees and towels won’t cost anywhere near $2,100.”

Sorenson clarifies, saying that Storm Squad didn’t use the entire $2,100 allotted to them.

“It’s no different than any other group giving away food for people to come to their meetings,” Ramos said. “If people are going to get upset about a T-shirt, then they have bigger problems.”

The Storm Squad will next appear at another basketball or wrestling event, Sorenson said.