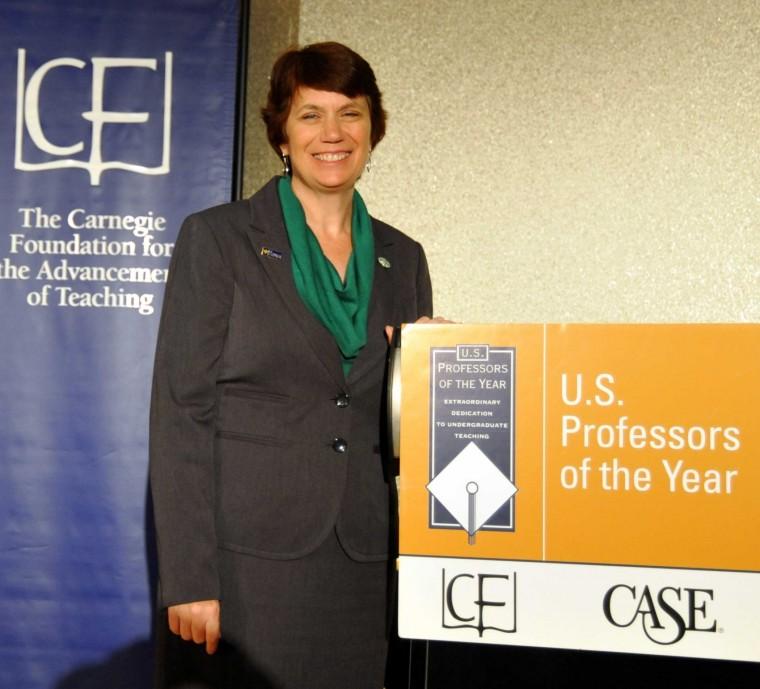 For the first time, Simpson College is home to Iowa’s Professor of the Year.

“(I was) totally surprised,” Dallinger said.

Winning Iowa’s Professor of the Year confirmed Dallinger’s teaching techniques that she was already using.

“I think more than anything it just encourages me to keep using some of the techniques that I use in the classroom,” Dallinger said. “And that’s a lot of service learning and kind of getting students out into the world to experience those kinds of connections and tie them to the different kinds of things they’re learning in the classroom.”

“Hopefully it restates the message that Simpson is a place for students and good teaching,” Griffith said. “We have excellent faculty here and good students, and that’s what we want people to know about.”

President John Byrd also thinks it is an honor to have a winner from Simpson College.

Dallinger agrees with Byrd about the professors and feels humbled to have won.

“It is kind of humbling because there are so many good professors,” Dallinger said.”And they all do so much good work.”

To win the Iowa Professor of the Year award, Dallinger had to compete against all professors in Iowa who were nominated from larger or smaller colleges.

There was a process involved in being nominated and requirements that needed fulfillment.

“A nomination can come from a colleague or an administrator at the institution,” Griffith said. “What we do here, at Simpson, is we’ve been asking the winners of our own teaching awards if they would allow us to submit their name for nomination.”

After being nominated, the nominees need to submit more required items.

“This office writes a letter of nomination and the individual writes a letter about their teaching,” Griffith said. “And then students are contacted for letters of support.”

Asking students for letters of recommendation was awkward for Dallinger.

“That was very hard,” Dallinger said. “It was so embarrassing.”

To get the letters Dallinger needed, writing letters of recommendation became an exchange process.

“I was writing letters of recommendation for seniors, and seniors kind of knew me the best,” Dallinger said. “The students I asked actually said they were kind of honored to be asked.”

Dallinger also had to keep the knowledge of her winning a secret from September until Nov. 18.

“It was kind of right in the letter,” Dallinger said. “And it said ‘Please keep this confidential until they make the national announcement.'”

A reception for Dallinger was held Monday, Nov. 27.