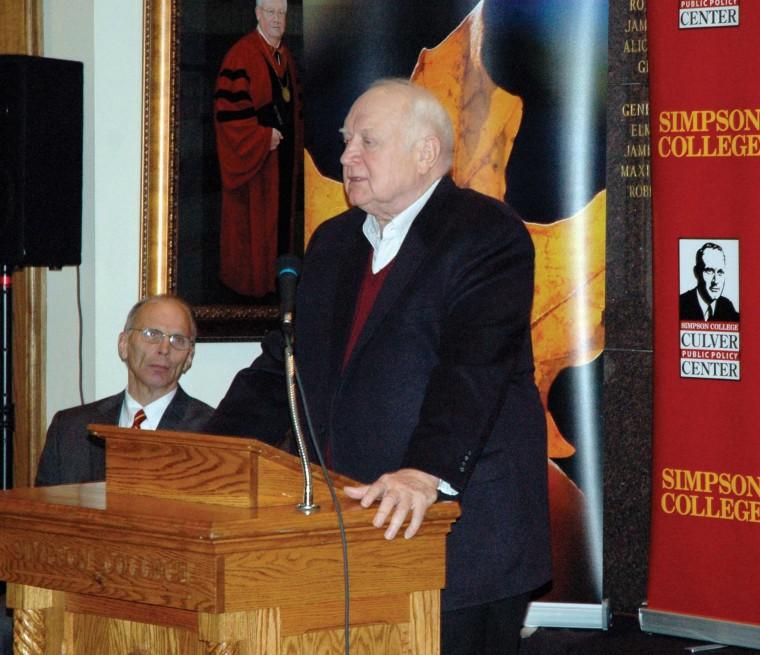 Members of the Simpson Community recently gathered on campus with Senator John C. Culver and his wife, Mary Jane Checchi, to celebrate the formal announcement and the first year of the Culver Public Policy Center.

The announcement of the opening of the Culver Public Policy Center, the college’s new center for students to study and promote public policy, law and civic engagement, took place in College Hall on Nov. 12.

Many present at the ceremony saw the announcement as an exciting new beginning.

In the spring of 2010, Peters became one of Simpson’s four Culver Fellows, a program already started by the center that gives scholarships to incoming students interested in studying public policy. As one of the fellows, he looks forward to seeing exactly how the center will impact the campus.

“It’s going to be interesting to see how it’s (run) the next four years,” Peters said. “Especially what differences we see from our freshman year to our senior year.”

While much of the center’s programming hasn’t yet been decided, several early initiatives will guide the center in its first years. In addition to the Culver Fellows program, the center plans to host an annual John C. Culver lecture and various keynote speakers set for the spring.

One such project could possibly begin next year, when the center tentatively plans on undertaking a project designed to educate people on the Iowa caucus.

“There are lots of people who come in and they don’t know much about the caucus, especially foreign press,” said John Epperson, professor of political science and director of the center. “One idea has been to do sort of a training session or seminar, particularly for foreign journalists.”

In conjunction with this project, Epperson says there has been discussion into whether or not Simpson could host one of the pre-caucus debates. However, at this point, ideas are still simply being tossed around.

“We’re in the process of sorting those ideas out and trying to figure out which ones of them make sense for us to do,” Epperson said.

In undertaking these projects and for the center as a whole, both Epperson and Steve Griffith, senior vice president and dean for academic affairs, agree that the center should provide students in all disciplines opportunities to get engaged in public policy.

“The idea is that if a faculty member who is interested in getting their students involved in some kind of activity they could go to the Culver Center and find things to get involved in,” Griffith said. “Maybe there will be a math major who wants to do a statistical analysis of something such as voting rates.”

Further, Epperson sees the Culver Fellows program, although centered on public policy and politics, as open to all disciplines.

“Since we think of public service in a broad sense, it’s not even that a Culver Fellow would have to major in political science,” Epperson said.

Final adjustments are still taking place, but soon the Culver Center will have its first physical home in a college-owned house near the corner of D Street and Girard Avenue, where students will be able to meet for discussion groups, research and a wide variety of activities.

Overall, Griffith says he sees the center as promoting one of Simpson’s main educational ideals, the idea of the hands-on education.

“I’m not sure of another small institution in this area that has a public policy center,” Griffith said. “If you come to Simpson, you’re really going to be involved in a hands-on way with your education.”