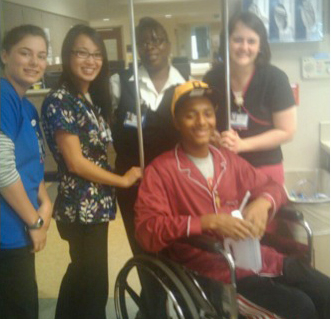 As Paul Holmes lay on the frigid cold operating table, he prayed that he’d wake up from his brain surgery. With his last words before falling asleep, he said he thanked his doctors for everything they’d done.

Two months later, Holmes is ready to come back to Simpson and hopes to resume his career as a Simpson running back for the football team and student of management and human resources.

Holmes was rushed to Mercy Hospital by ambulance on Sept. 21 after suffering what he thought was a painful migraine and becoming unconscious. The doctors at Mercy told him the reason he was so tired was that he had mononucleosis and that the reason for the extreme headache was that he had a growth in his brain.

“I was speechless and didn’t want to believe it,” said Holmes.

The doctors at Mercy suggested he be transferred to the University of Kansas Hospital. That day the ambulance drove him back to his hometown.

Doctors at KU ran tests. Holmes and his family waited for the results.

The doctors also told Holmes and his family that the tumor could have been growing since he was around 10 years old.

“To think that was in my brain the whole time and I had no idea is a very scary feeling,” Holmes said.

Holmes was scheduled for surgery at 8 a.m., just one day after finding out about his condition. With the surgery came risk that would lose memory or suffer paralysis.

The doctors and nurses told Holmes the surgery would take around six hours.

The surgery went longer than planned, but 17 hours later Holmes was wheeled out of the operating room. The doctors said it was a good thing he was young and in shape because in other cases the body would not have been able to handle such an intense surgery.

“The first voice I heard while waking up was my twin brother, Byron, saying ‘Keep fighting, Paul,'” Holmes said.

Holmes had a total of 17 staples and two stitches in his head and two more on his shoulder.

Then the road to recovery began.

Two days after waking up from surgery, Holmes tried to walk and passed out. He tried again the next day and walked a mile. The floor where Holmes walked his mile is now called Miracle Mile in his honor.

And a miracle it was.

The doctors were impressed by his rate of recovery and he continued to gain motor skills and confidence throughout his weeks at the KU Hospital.

The night before he was supposed to be discharged, Holmes suffered a mild seizure and had to stay two more nights. He was put on seizure medication to make sure it wouldn’t happen again.

Holmes was finally discharged on Oct. 18. He continued physical therapy twice a week for three weeks. The doctors told him it takes the average person six months to recover. However, it would only take him around two.

Holmes said the experience has given him a new outlook on life.

“I am not taking my second chance at life lightly and I thank everyone at Simpson, especially the football team, for their support and prayers,” he said.

He never expected something like this to happen to him. He said he couldn’t have done it without his family.

His father and twin brother, who live in Georgia, were there in a heartbeat.

“Family is really important and we have to stick together,” said Holmes. “This has created an even stronger family bond between us.”

“Thank God that my son is still alive and I am proud of him for working so hard to get back on his feet,” said his mother, Mina Holmes. “It’s OK if he goes back to football. Our family will continue to support him.”

Holmes plans to return to school in the spring and take summer courses to get back on track with his educational goals.

“Look for me back on the field, number 20 in honor of my brother,” he said, “This near-death experience is not a setback; it is motivation to be the best I can be. I’m a fighter and want to motivate people to let them know anything is possible, because I am a walking example.”