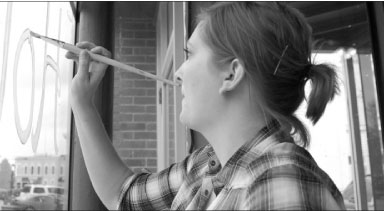 Simpson artists show off their talents in a way that gives back to their community.

On Sunday, Nov. 14, and Tuesday, Nov. 16, students involved in the Starving Artists Club (SAC) along with members of the community painted the windows of vacant buildings on the square of downtown Indianola.

“It has had a positive effect on the community already,” senior Katelyn Teachout said.

Members of the Starving Artist Club congregated in the town square. While painting, the holiday artwork captured the attention of those driving by as well as the nearby storeowners.

“It just snowballs from there,” Teachout said.

Owners of the nearby businesses recognized the work of the students and asked them to paint their windows as well. The windows feature seasonal scenes including snowflakes, snowmen and gingerbread men while another Christmas scene includes a decorated tree surrounded by gifts.

“We are trying to create an atmosphere where student artists from Simpson contribute to a community,” Teachout said.

In order to get in the holiday spirit, Christmas carols were sung among an atmosphere of holiday treats and shopping. During the Holiday Extravaganza the window art was displayed, allowing the community to partake in the art programs at Simpson.

“It’s nice to see your work off campus and have people enjoy the winter scenes,” Teachout said.

SAC was formed this year and is utilizing art as a form of public relations. Paper bags displayed sporadically around the Simpson campus serve as advertisement for the SAC. The idea of using paper bags, also known as a sack lunch, was developed by senior Maddie Beck because of its relation to “SAC,” the name of the club.

Beck took a trip to Hobby Lobby and sought out bags with fun patterns and designs including animal print, polka dots and Simpson colors. In the bags, Beck placed art items including markers, crayons and paintbrushes to encourage students to use their own creativity both on and off campus.

“We’re actually willing to do stuff for the community,” Beck said. “We’re not just involved in campus stuff, but we can branch out and do other things.”

Everyone can join in on the art experience at Simpson by sharing his or her creativity. SAC meets every Thursday evening at the Art Center on campus.

“Even if you just like art, it’s a fun club to be in and get involved in,” senior Miles Swenson said.