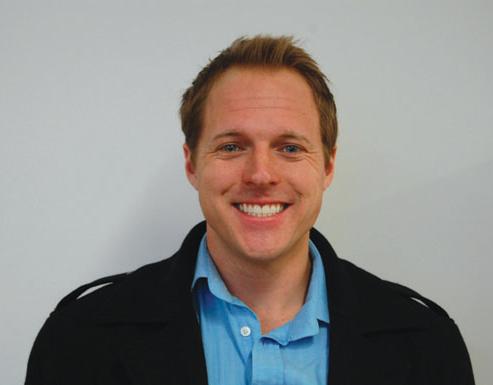 As a new member of Simpson’s faculty, Jason Harle, adjunct professor of sports and fitness management, is bringing an enthusiastic attitude and creative mind to campus.

Harle was hired at Simpson three weeks before the spring semester began. Nicolle Whalen, assistant professor and chair of the sports science and health education department, hired Harle after seeing his work experience and the excitement he had to be a part of Simpson.

“What blew me away initially was his confidence,” Whalen said. “His ability to bring you into a conversation and to present his ideas gets you excited about what he wants to add (to Simpson).”

Students agree that Harle is a good addition to the department.

“Jason is energetic, easy going and you can really tell he loves what he does,” senior Pat Tierney said. “He brings a lot of the real world into the classroom, and applies what we’re learning to where we’ll need it in our futures.”

“He can connect with students very well, he is knowledgeable and he makes class fun,” Cambridge said.

“It’s easy to tell he’s one of those instructors that just ‘gets it,'” Tierney said.

Not only is Harle busy teaching at both Simpson and DMACC, he also spends time working as the vice president of a track and cross-country journal that is set to be released this June.

The idea began after Harle and a friend realized the absence of a journal that combined both track and cross-country. Today, a team of 10 is gathering information from researchers, nutritionists and coaches to launch the project.

“What we are essentially doing is picking the brains of some of the best and brightest throughout the nation,” Harle said.

The team is even in contact with an Olympic gold medalist coach, Harle said.

Harle is excited to be on campus where he feels the “passion of the student base” and hopes to become active in any area he is needed for.