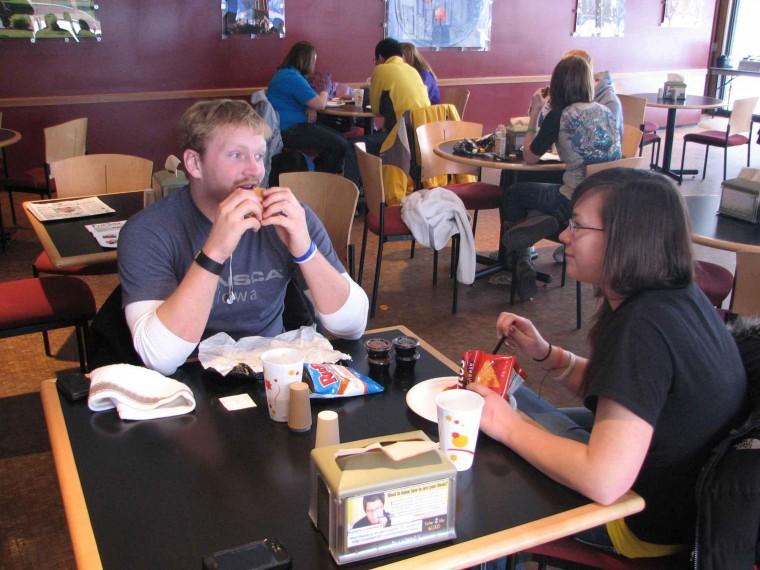 Students expecting to enjoy chicken nuggets on Thursday at the Storm Street Express were in for a surprise when they saw that corndogs took the place of their beloved chicken nuggets.

The Grill underwent changes regarding what was being served at the Storm Express on weekdays. Of the changes, the chicken nugget day seems to be the one that frustrates students the most. Many individuals base their dining schedule around Thursday, the previous chicken nugget day, which is now nugget Tuesday.

“We want students to have more options to choose from,” grill employee Misty Hartzler said.

A couple students were not aware of the specific day the chicken nuggets were featured.

“I’m happy with the change as long as chicken nuggets remain on the menu,” freshman Abby VanEvera said.

Some of the student body is welcoming these changes, but others are not so pleased with the disruption to the usual menu.

Sophomore Matt Haley couldn’t believe that he had missed chicken nugget day and ended up ordering chicken strips instead.

“I was so pumped for chicken nuggets,” Haley said.

Students were not given any forewarning as the modifications took place immediately after the second week that classes resumed. An e-mail alerting students of the changes in the Express line was sent out Jan. 19.

The Storm Street Grill will experience many additional changes within the next couple of weeks. Along with the Express line changes are new additions to the menu starting Monday, Jan. 24. These additions include: bread sticks, onion rings and cheese balls. Another feature is that the bread used will now be freshly baked.

Few of the options at the Storm Street Grill Express are what doctors would perceive as healthy, but these changes are great for those who do not like routine.

“I’m happy with the changes, but I am used to healthier foods such as more vegetables and fruits to choose from,” Kopper said.

The modifications being made in the Grill have been surprising, but students will still be able to fulfill their desired lunch each week without visiting a McDonalds: the delicious chicken nuggets.