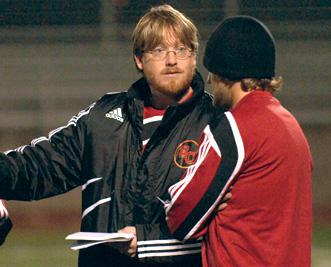 Mike Wilson, head men’s soccer coach, handed in his resignation over winter break, leaving the team and the athletic department searching for a new soccer coach.

Wilson’s record at Simpson was 35-66-9 during his five years at the college.

“It’s interesting because the transition is still going on and reactions are still being formed,” said junior defender Nate Van Horn. “We will continue to see how everyone transitions into a coach-less offseason and then on into a new coach.”

Simpson Athletic Director, John Sirianni, is currently in the process of searching nationwide to find the best candidate to replace Mike Wilson.

“We are looking for a coach who is committed to making Simpson men’s soccer a quality program,” Sirianni said.

Despite the uncertainty of where this off-season is heading, sophomore midfielder Mark Lahart says he hopes the transition is a positive one.

“I think a lot of players are really happy and excited about the change,” Lahart said. “I know it’s been tough because we know we are going to lose some recruits, but the outlook of the program is definitely more positive.”

After a list of candidates is narrowed down, a few soccer players along with academic and athletic administration members will be involved in the interview process, which consists of committee meetings and phone interviews. Eventually, a candidate will be invited to campus.

Lahart said he wants to play under a coach that inspires and brings a positive attitude to Simpson’s men’s soccer in the near future.

“This program has been ‘mediocre at best’ for a while,” Lahart said. “We need somebody fresh to come in and change a lot of things. Somebody that is upbeat and passionate about the game but can still have fun. Somebody that can make things work for the players he has; not try to force some system that wouldn’t work best.”

At this time, the men’s soccer team is doing the best they can in order to adapt to this situation. Sophomore Jeremy Reinert, Van Horn and Lahart have been working together to help set up open gym times and indoor tournaments for the team to attend.

“Many people have shown interest in getting our lifting schedule set up, as well as our off-season playing, so everyone in general is ready to do what they need to,” Van Horn said.