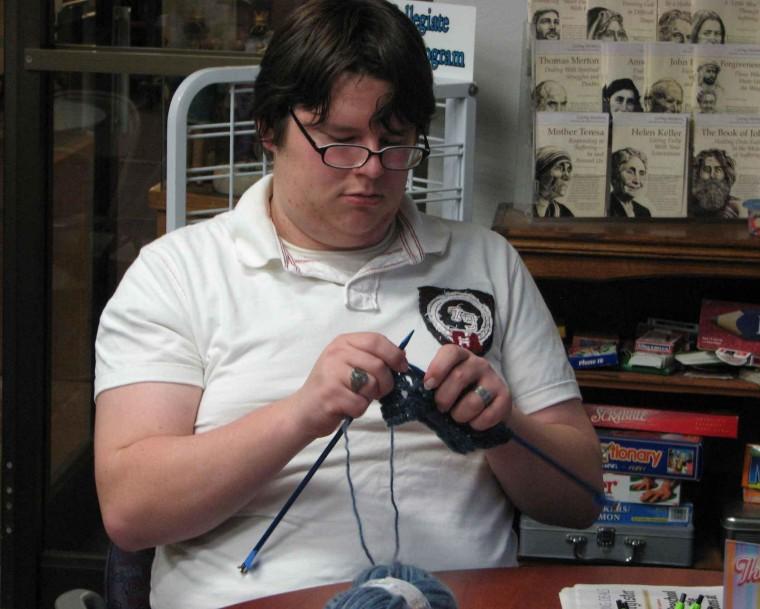 An idea randomly brought up at a Simpson basketball game last semester became reality when the knitting club was introduced to campus.

Sophomore Annaleah Herrman taught herself to knit this summer and when she saw some of her fellow Simpson students knitting at a basketball game she went to Stephanie Neve, service coordinator and assistant Chaplain, to discuss the idea of a knitting club.

Neve, along with senior Lara Roy, had tried to start an informal knitting club after Food for the Soul last semester, but the group never generated much interest.

“(When) Annaleah said she was interested, we thought we should see who else on campus is interested,” Neve said. “Then we had enough interest that we decided, OK. Let’s make this a more formal thing.”

The interest was apparent when 16 people showed up to the first meeting Tuesday, Jan. 18.

“A lot of us probably didn’t realize how many young people there were who like to knit,” Neve said. “And we did invite staff and faculty too so hopefully some of them will be joining us too. So you kind of, maybe, hopefully will get to know staff and faculty at Simpson as well.”

The group was made up of all experience levels and included not only knitters but a few crocheters as well.

Never agrees with the charity idea.

“We’re wanting to donate some of our projects to service sights,” Neve said. “I had seen online for the Animal Rescue League a “‘Knittin’ for Kittens” thing so I thought we could do something like that. So maybe eventually we’ll work our way up to making cat beds.”

For now participants are encouraged to bring their own projects or start a new one with the needles, yarn and patterns provided by the club.

“I heard it was relaxing,” senior Hank Muzney said. “Now I’m not so sure.”

Muzney is a first time knitter. His teacher is freshman Carly Warner. Warner has been knitting since she was in the sixth grade and has experience teaching others to knit.

“My roommate also knits, and so we’ve taught several people, like our whole floor how to knit,” Warner said. “I don’t really remember why I had the motivation to try it, but I just told my parents and they got me a ‘Learn to Knit’ DVD and I just taught myself.”

Unlike Warner, Muzney decided to learn to knit from a real person in the knitting club.

“I don’t feel so stupid if I can’t get it because I have people around me to help me,” Muzney said.

The knitting club meets every Tuesday from 3:30 p.m.-5 p.m. in Dirlam Lounge. Everyone is invited to join in

“Even if you have never touched yarn or a knitting needle you should come and we’ll teach you,” Herrman said. “We’re happy to.”