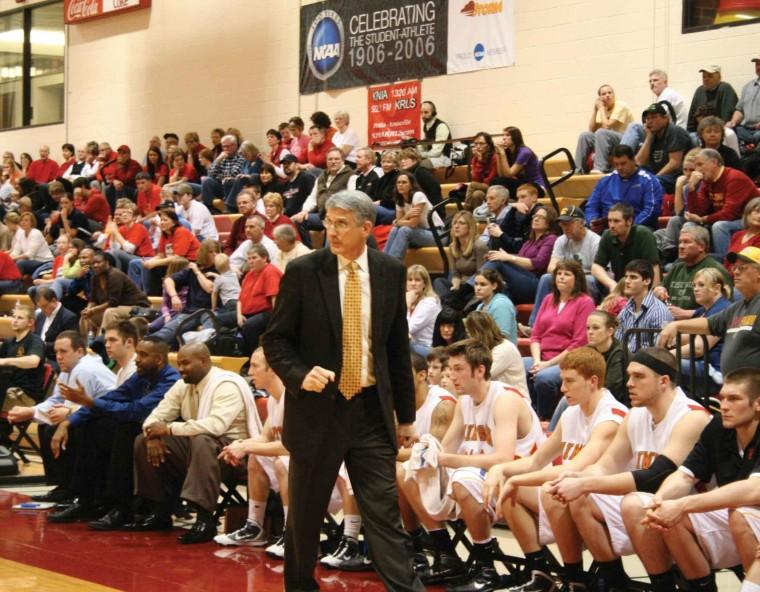 Simpson’s former men’s basketball head coach, Bruce Wilson, hasn’t lost his touch. As the newest assistant coach for the Iowa Energy, he continues to build his legacy both on and off the basketball court away from Simpson.

A 1976 Simpson graduate, Wilson’s coaching tenure at Simpson lasted for 23 seasons where he found most of his success in the 90s, leading the Storm men’s team to three conference championships.

Iowa Energy, a NBA Developmental league (D-League) team stationed in Des Moines, grabbed Wilson to help break down and analyze team play in games and scouting. Under head coach Nick Nurse, Wilson is finding his new home to be a bit more hectic.

“The travel in the NBA D-League can be pretty crazy,” Wilson said. “We played at home on Christmas night and had to load the bus after the game and play a 5 p.m. game at Ft. Wayne (Texas) the next day. We arrived at our hotel at 7:30 a.m.”

Wilson’s new job as an assistant coach with the Energy comes with a lot of new tasks to be a part of, such as being involved with the league draft that took place on Nov. 1 and helping to run training camp. When the draft took place, he had to help research over 300 players as the Energy staff strategized around 15 other teams and eight rounds.

When it came to differences between the D-League and Division III levels of play, Wilson noted the differences in available technology for evaluation and rules. Wilson also said he finds comfort in the similarities of the character of the players between the levels.

“I find very little difference in them and the players I have coached in the past except that they are bigger, stronger and more athletic,” Wilson said. “They have the same needs to compete and get on the court to help the team be successful. We do a lot of community outreach, and I am impressed with the willingness of our guys to give back to the community.”

Former players at Simpson felt blessed to have been able to play under his coaching style. Senior David Fouch’s favorite quality of Wilson was his personal feel.

“Coach Wilson was always interested in us as people and not just players,” Fouch said. “He was constantly asking how our families were doing and if there was anything he could do to help us out. Academics and helping us develop into productive young men was first and foremost for him, and he made that clear to us.”

Senior Brett Smithart was once a member of the men’s basketball team until he was sidelined with an injury his sophomore year. He was never an official recruit of Wilson’s but was picked up after crossing paths in Hopper Gym.

“After I was no longer able to play, I still talked with Coach Wilson several times throughout the year,” Smithart said. “We talked about what we had been up to and a little bit about basketball. Our friendship didn’t end with the injury.”

Smithart was also happy about Wilson finding a new place to continue his career.

“I think Iowa Energy is fortunate to have somebody who is a good role model both on and off the court,” Smithart said.

Wilson is glad to be given the opportunity to coach at a new level with similar experiences.

“I love being involved in coaching basketball and in working with players as they go on their journey through their basketball careers,” Wilson said. “I don’t know where this experience will lead me, but I am having a great time and enjoying the journey.”