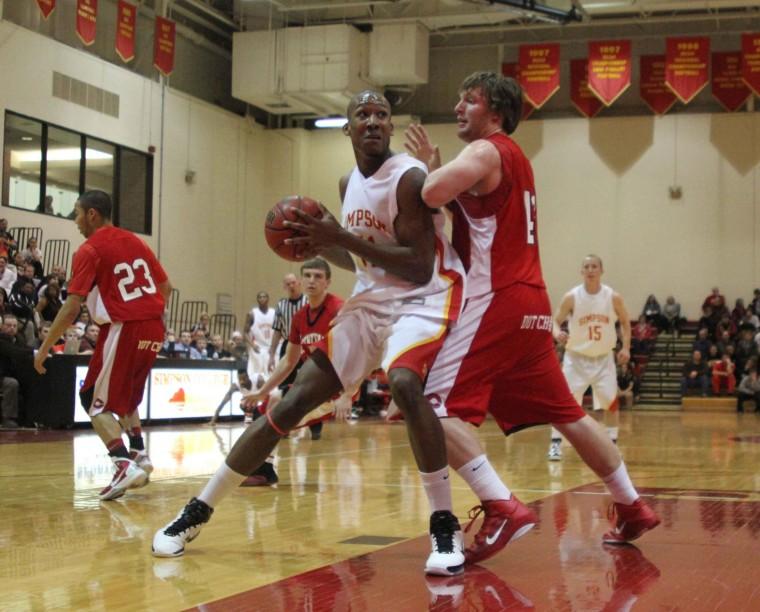 After winter break the men’s basketball team found itself with a few wins and an extra player.

Cornelius Mosby, a junior transfer student from Ellsworth Community College, brings a 6′-8” frame to the Storm effort, and Head Men’s Basketball Coach Charles Zanders said that he hopes new players like Mosby will shape the program for success in the years to come.

“Cornelius is a great addition to our team and to the Iowa Conference,” Zanders said. “I hope his presence, abilities and great attitude will lead to more players of his caliber to take a serious look at Simpson College in the future. Cornelius has only had seven practices and we’re 2-1 with him on the team. Good things are ahead for the Storm.”

The team has already surpassed the total wins for last year after only 13 games, and Zanders said he is happy with the way things have been progressing through the season thus far.

“I think the season has gone well,” Zanders said. “I’ll always tell you I’d like to see a few more wins in the win column, but they’ll come. Four of our losses have come to teams ranked in the top 15 in the country. We now currently sit in third place in the conference and I think we get better every game. I absolutely love the work ethic of the players and I think they have confidence in us as a coaching staff.”

During winter break the Storm headed to Phoenix for the Cactus Jam, leaving the tournament with two wins and one loss.

Simpson fell to defending Division III champions from the University of Wisconsin-Steven’s Point (W-SP) 75-42, shooting only 32 percent from the field.

“It isn’t every day we have the chance to play a top five team in the nation,” junior guard Zach Barragan said. “When we played (W-SP), the defending national champions, we were able to see what a great program looks like. Playing teams like that only help.”

“Just seeing the style of play that W-SP had made me realize what it takes to compete at that level and helps me think about what I would need to work on in the future,” Vanderheiden said.

Simpson also fell to Whitman in overtime 76-81, but walked away with its win over Linfield College 68-58.

The Storm fell on Saturday, Jan. 15 to Luther in Decorah 45-57. Vanderheiden notched 17 points going 8-11 from the field. Luther’s 55 percent shooting abilities from behind the arc were too much to handle.

“We didn’t make plays when we needed and they did,” Zanders said. “Luther is a tough place to play and they are a very good team. I’m encouraged to know we took the 1st place team in the (Intercollegiate Athletic Conference) to the wire while shooting as bad as we did. A make here or an extra rebound there – we win that game. We get another shot at them soon.”