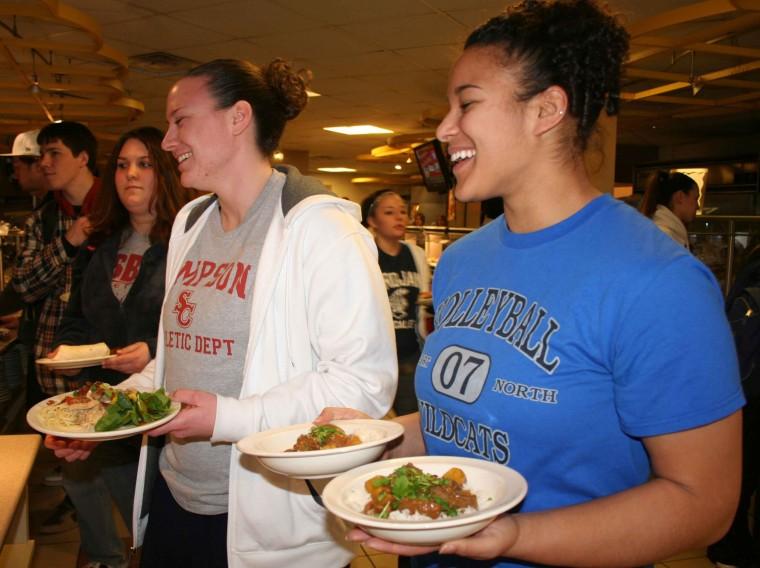 The entire Simpson community was welcome to jump in and be a part of the Iron Chef competition in Pfeiffer Dining Hall last Tuesday, Feb. 15. The event brought new foods and people together.

“It was a collaboration on everything and everyone put in their ideas,” Simpson chef Katya Nicholson said.

The competition was composed of three teams. Team one, composed of Chef Katya Nicholson and junior Bryan Bruening, made Japanese beef curry. Chef Jeff and Kathy Witzenburg, faculty services secretary, made Cajun chicken pasta with a mango spinach salad as team two. Winning the competition with citrus tofu burritos with a beef option was team three with Chef Steve and Debra Lord from admissions.

The pressure was on when the lunch rush burst through the doors.

“You just got to keep your head down and keep doing what you’re doing,” Debra Lord said.

Although the burritos took the prize of the George Foreman grill, each individual had their own favorite.

“I had the Cajun chicken pasta with the mango spinach salad,” said Barb Ramos, associate professor of education. “It’s delicious, I haven’t tried anything else, but this is definitely worth a vote.”

“I really like how creamy it is, but I also think it might be a little too spicy,” VanEvera said.

“Personally, I like the curry,” freshman Kelsey Allison said. “I really like the spices that are in it.”

“The burrito was really good,” Johnston said. “I’m a vegetarian and the tofu burrito was done really well.”

However, the burrito wasn’t well received by everyone.

“I didn’t think the burrito was all that great,” sophomore Adam Smith said. “Then again, I didn’t try the tofu citrus mixture in mine.”

The competition was enjoyed and suggestions were also made for improvement.

“I think it’s pretty cool because it gives us an opportunity to try new stuff,” sophomore Meredith McCay said.

“The food is better today,” Burgett said. “It’s nice to partake in something that is out of the norm.”

“I really enjoyed the Iron Chef competition,” Henry said. “It was a nice break from the traditional Pfeiffer lunch. I felt like these dishes were much more exceptional than usual. “

Students have suggestions for the next competition.

“I think they should have portioned it,” freshman Luke Kirchner said. “That way everyone can get a little bit of each rather than a whole plate.”

Sophomore Taylor Stockdale did not try any of the dishes.

“I think they should try more appealing foods the next time they do this,” Stockdale said.

Blair Stairs, general manger of dining services at Simpson, was pleased with the outcome.

“I think it went very well for our first time,” Stairs said. “Everyone seemed to enjoy it from what I heard, and I think it’s a great experience to do this.”