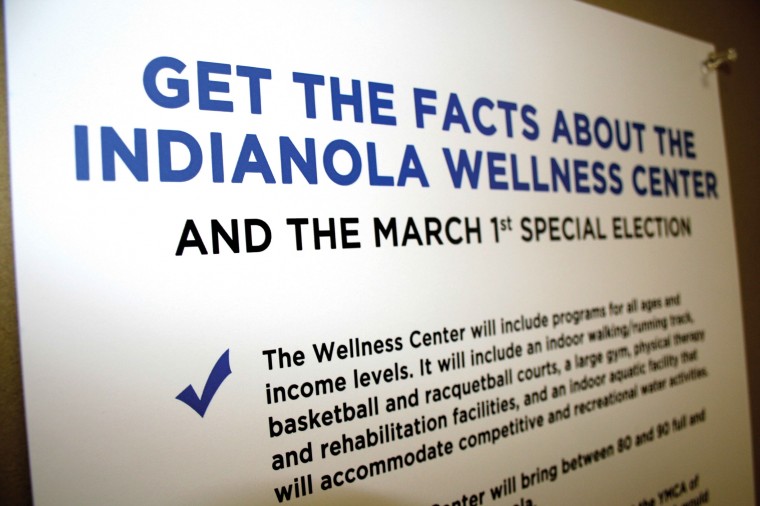 Community members who oppose the proposed wellness center have remained somewhat quiet as supporters have been making noise with a campaign. However, not all ages think a YMCA will benefit Indianola.

One fact that is listed on information posters around town is that there will not be a property or sales tax increase.

According to one anonymous Indianola resident, property tax is one of the main concerns of the community. The female resident requested to remain anonymous for the article.

The anonymous female resident, who answered questions at Hy-Vee in Indianola, said that the economic times are not acceptable for building the proposed wellness center.

“I think I can go walk out on the sidewalk,” another older resident said. The male resident also requested to remain anonymous.

The male resident said he believes the city has better things to spend the town’s money on than the potential YMCA and sporting events. He mentioned a learning center that was formally located in Indianola.

“The worst thing (the town has) have ever done is to close that learning center,” the male resident said. “It (was beneficial to) all kinds of kids.”

Like the learning center, he said that he thinks this wellness center would not last.

As mentioned in previous Simpsonian articles and Simpson officials, the wellness center would include multiple new facilities including a new pool that would accommodate for competitive and recreational purposes.

The proposed wellness center would also include an indoor track, a large gym and basketball and racquetball courts. There would also be physical therapy and rehabilitation facilities.

It is also estimated that the facility would bring around 80 to 90 full or part-time jobs to the city.

To some, this new facility has the potential to take jobs from current workout facilities already located in the city.

The March 1 vote will reveal the true feelings of the Indianola community.