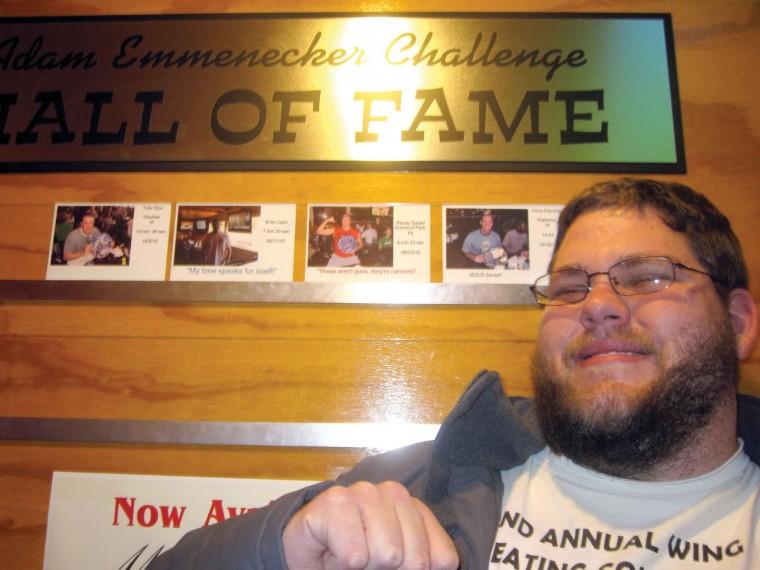 A recent Simpson grad became the fifth and most recent person to win the famous Adam Emmenecker Challenge at Jethro’s BBQ in Des Moines.

Peter Merchlewitz, who graduated in December, overcame the monstrous sandwich in under 15 minutes on Wednesday, Jan. 26.

A five pound sandwich with a pound of waffle fries on the side, Jethro’s BBQ’s Adam Emmenecker is made up of a twelve inch pork tenderloin, two buffalo chicken tenders, a half pound bacon cheeseburger, one pound of Texas brisket, two cubes of fried white cheddar cheese, all covered in a cheddar cheese sauce and topped with a hot and spicy pickle. And if the amount of food isn’t enough, it all has to be finished in 15 minutes.

Named after Adam Emmenecker, Drake University’s 2008 Missouri Conference Player of the year, it is a feat not even Man vs. Food’s Adam Richman could accomplish when he tried in October 2010. Richman ran out of time with over a pound of food left to eat. Merchlewitz had time to spare, finishing the challenge in 12 minutes and 3 seconds, the third fastest time on record. His prize was a t-shirt, free meal and his own place on the Wall of Fame.

According to Merchlewitz, those who complete the Emmenecker Challenge seem to receive rock star status in Iowa.

“When I worked later that week at (local bar) The Zoo, people were like ‘Oh my God, Petey, you did it,'” Merchlewitz said. “I consider myself somewhat modest; it’s just what I do.”

This was not Merchlewitz’s first food challenge win. In his hometown of Winona, Minn., a place called Zaza’s has an annual wing-eating contest.

“It started as a drunken challenge one night,” Runyan said. “Somebody brought up food eating contests, and Peter had on his wing eating shirt that he had gotten when he was in Minnesota and won the title up there. Somebody bet him that he couldn’t do the Emmenecker. I was like, ‘Oh I bet he can,” and set a date. We went up there, and the rest is history.”

To prepare for the challenge, Merchlewitz ate iceberg lettuce and a head of boiled cabbage the night before to help expand the stomach and timed himself to get into the right mindset.

“A lot of it is just kind of mind over matter,” Merchlewitz said. “You have to tell yourself ‘I’m not full, I’m not tired of this, you can do this’ despite how big and how menacing it might look.”

Merchlewitz’s favorite part was the half pound Angus cheeseburger, and while all that meat may seem daunting, it was the waffle fries that presented the greatest challenge.

“They’re so filling,” Merchlewitz said. “That’s where you have to be like ‘Oh no, I’m not full, these taste great’ even though I’m physically going, ‘God I don’t want to eat another one of these.'”

Runyan claims that Merchlewitz polished off the sandwich in the first three minutes and spent the last nine minutes taking his time on the waffle fries. Runyan said some people were skeptical that the fries would kill him, but he had no doubts.

“He made Adam Richman look like a wimp,” Runyan said.

On Wednesday when Merchlewitz and his friends went to Jethro’s BBQ there was a family that was just finishing dinner as they arrived. When they realized Merchlewitz was going to attempt the Adam Emmenecker Challenge they decided to stay to watch.

“People were pulling out cell phones, cameras, just recording it and taking pictures to just watch,” Merchlewitz said. “After it was all said and done the place erupted and as we’re about to leave the family comes up and says ‘We’re so glad we were able to see this because my little kids saw the Man vs. Food with the Adam Emmenecker, and they just wanted to come up here. This is the one time we were able to make it, and they wanted to see somebody do it and you did it!’ Apparently I made those kids’ night.”

For anyone wanting to attempt the Adam Emmenecker Challenge, Merchlewitz has a couple tips. Don’t starve yourself beforehand because it shrinks your stomach, water always helps and try making your own large sandwich to practice eating quickly. However, Merchlewitz cautions that there is a fine line between being able to keep eating and making yourself sick.

“If anybody wants to do it, do it for fun,” Merchlewitz said.