Taking the plunge for Special Olympics 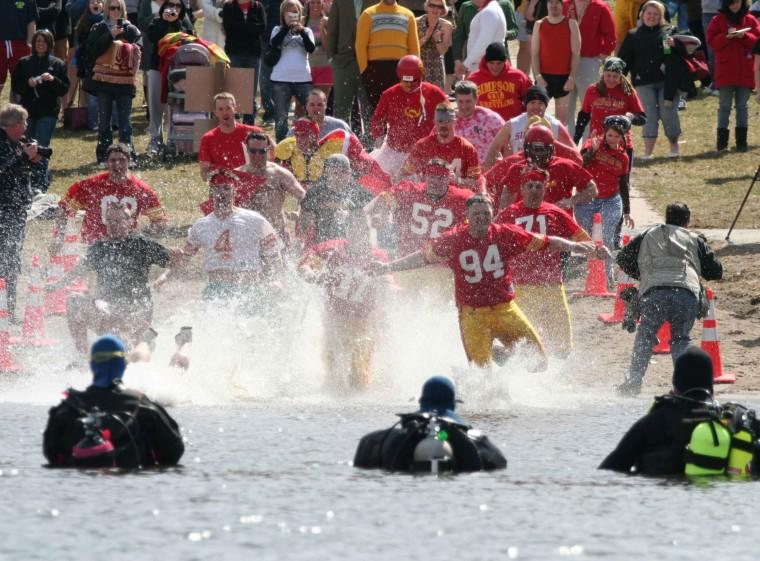 Lake Aqhabi will be filled with current and former Storm football players, among others, on March 5 to help out the Special Olympics of Iowa. The event has become a tradition at Simpson College.

Assistant Football Coach Paul Davis participates every year and knows what the requirement is to be able to take the plunge.

“They have to raise at least $60 to be able to plunge,” Davis said.

The money fundraised will go to the Special Olympics. A fundraising event was held last Wednesday, Feb. 16 – meatball subs were for sale in Cowles Fieldhouse.

“We solicit donations,” Davis said. “What we did today was sell meatball subs for a dollar.”

There are many teams that take part in the event, and Davis had an estimate of how many would be taking part in it this year.

“There (are) several from Simpson…probably about eight, nine, or 10 different groups,” Davis said.

Nate Seberg, director of athletic marketing, has a goal in mind when it comes to the number of teams.

“Our goal this year for the college is to try and get more college teams involved and trying to get the college more involved throughout everything,” Seberg said.

Seberg is in one of the groups known as the Buxton Boys.

“The group I’m involved in is all former football players, so I get see a lot of guys that I’ve played with,” Seberg said. “And they come back and participate in this, so a lot of times it’s about the only time of year that I really get to see them.”

Junior Cameron Scott watched from the sidelines last year as his teammates and other Simpson alumni took the dive into the cold water. This year, he will be joining in on the action.

To make the idea of getting into freezing water a bit more appealing, teams or individuals may dress up in costumes.

Davis even dresses up for the occasion.

“A few times I’ve been known to a wear a tutu, a pink tutu with a football helmet on, which is kind of contrasty,” Davis said.

Even though it can be fun and silly, paramedics are at the scene in case anything was to go wrong.

“There are paramedics,” Seberg said. “We have a full paramedic team.”

When all is said and done there is a celebration with lots of food.

“Restaurants in the area are very good at supporting this event and every year we’ve had more food than we’ve had people to give it to, almost, which is great because we’ve never had people go back hungry,” Seberg said.

“It’s just really neat to see the community, and the county, get behind an event,” Seberg said.