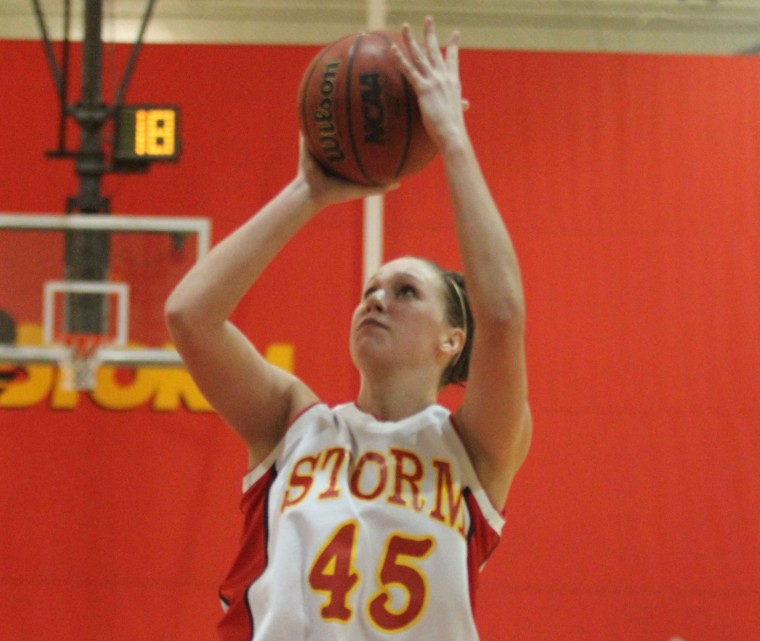 The women’s basketball team (16-3, 10-0 IIAC) added two more wins after they traveled to Loras College and University of Dubuque.

The Storm faced the Loras Duhawks (9-10, 5-5 IIAC) last week, and the win marked the 15th straight win for the Storm. Simpson was down by one point at the half, but the Storm came back strong in the second half and won, 76-68. Senior guard Amy Hamilton had a team-high of 16 points, junior center Stacey Schutjer added 14 for the Storm and sophomore forward Kate Nielsen went four-for-four at the line, which added 12 to the team’s total.

“The first time we played Loras we won by over 20 (points), so it was closer than we would have liked it,” senior forward Jeni Hegstrom said. “Now we have a week off to get ready for Coe on Saturday. Coe is No. 2 in the conference, so it would be great to have a lot of support.”

“This was a very physical game for us,” senior guard Darrina Bledsoe said. “Fortunately, this game revealed how if one of us aren’t playing well, others will step up and perform.”

Leading the pack was junior forward Ali Sokol with 15 points. Following Sokol was sophomore guard Jamie Elbert with a career-high of 13, and Hegstrom contributed 12 as sophomore forward Cathy Kain added 11. The Storm women remain undefeated in the IIAC, and face the Coe College Kohawks on Saturday, Feb. 5 at home.