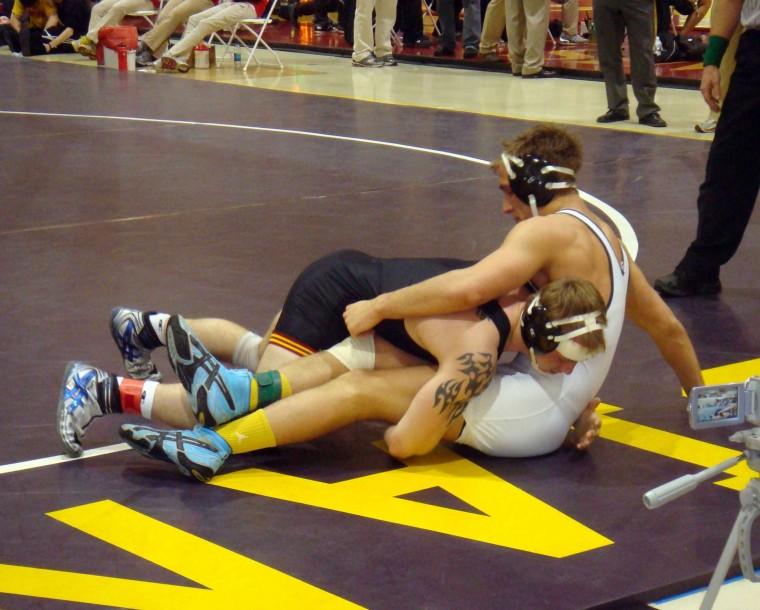 The Storm, which finished 2-13 this season, have shown improvement over last year by beating Buena Vista for the eighth place. Simpson, with eight competing wrestlers, faced a challenging conference that included Wartburg College, ranked first in the country, and a fifth ranked Coe College. Also ranked were Cornell and Dubuque at 19 and 26.

Senior Caleb Brus at 149 pounds placed fifth in the competition and ended his college wrestling career with a 98-64 record. Brus, a fourth-seed, lost in his first round but managed to pin his opponent just shy of four minutes into the consolation bracket. He lost his next round to a third-seed Cornell wrestler Jacob Schwebke but won due to medical forfeit in his last match for the fifth spot.

Clint Manny, head wrestling coach, said the team is moving in the right direction but gains will be slow and steady in nature.

“I believe our program is heading in the right direction, but it’s taken and will continue to take a while before we really start to see the type of results we’re wanting to see,” Manny said.

Manny wants the team to concentrate on off season training and have every wrestler push himself hard for next year.

“Our main focus this offseason is strength and conditioning sessions in the weight room and doing as much offseason wrestling as possible,” Manny said. “My main goal for our guys is for each of them to improve each year they’re in our program. A lot of growth in this sport comes during the offseason and it is their responsibility to push themselves during this time. “

Manny said that recruiting will be a vital part of future seasons’ success.

“The main goal for our coaching staff will be recruiting,” Manny said. “I would like to bring in three to four ‘blue chip’ recruits and continue to increase our roster size from years past.”