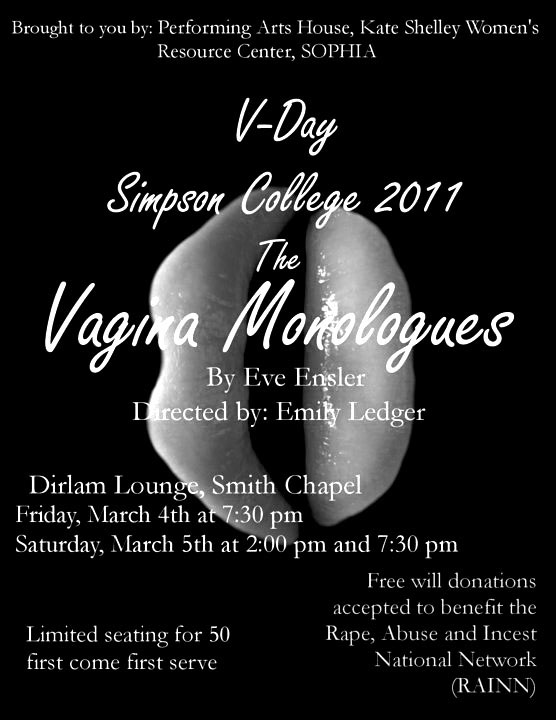 Senior Emily Ledger will be directing The Vagina Monologues this year as Simpson College takes part of the V-Day campaign on March 4-5.

Each year a student is selected to direct the show and the proceeds are donated to a charity of their choice.

“The Vagina Monologues is part of the worldwide V-Day campaign to stop violence against women and girls,” Ledger said. “It was written by Eve Ensler after she interviewed 200 women about sex, relationships and violence. The purpose of performing it is to celebrate being a woman and to raise awareness and change attitudes about violence towards women.”

The Vagina Monologues script is flexible and the official script is made available to directors after they apply to organize a V-day event on their website (www.vday.org). They also spotlight one new monologue each year that focuses on a different group of women that are experiencing violence. This year they are focusing on Haiti.

Normally a show raises money by charging admission but for the last few years the Simpson performance of The Vagina Monologues has been free, and they have raised money through a silent auction sponsored by SOPHIA.

This year’s silent auction proceeds will go to the Rape, Abuse and Incest National Network (RAINN). It is the nation’s largest anti-sexual assault organization and operates the National Sexual Assault Hotline at 1-800-656-HOPE and the National Sexual Assault Online Hotline at www.rain.org. RAINN also plays a large part in educating and making efforts to prevent sexual assault and improve help for victims.

“I have not been involved with The Vagina Monologues before this year, but I did watch them last year and decided it was something I wanted to be a part of,” junior Anna Statz said.  “I’m all about women empowerment, and this is such a great way to increase awareness about the issues of violence many women face, such as rape and genital mutilation, and it also promotes sexual freedom and assertion in a very entertaining way.”

Senior Karmin Stonehocker is also a first time performer in The Vagina Monologues though she has helped in past years as a member of the Kate Shelley Women’s Resource Center.

“It is definitely a fun learning experience that provides the audience with such a wide array of emotion that it is hard not to get caught up in it,” Stonehocker said.

Ledger said she got involved initially because it was another opportunity to improve her acting skills; however, this event and minority perspective classes here at Simpson College have inspired her to stay involved.

“I have learned shocking things about violence against, say, African-Americans, American Indians and women,” Ledger said. “It has inspired me to join in raising awareness about these wrongs-and theater is a powerful vehicle for doing so. Live theatrical performances can bring other peoples’ experiences closer to home for the audience. It’s the difference between reading about domestic violence and actually seeing it acted out just feet in front of you.”

“People should know that they might feel uncomfortable watching the Monologues, but I think that’s part of the point,” Statz said.  “The fact that the discomfort is there shows women sexuality is still a ‘hush hush’ topic.”