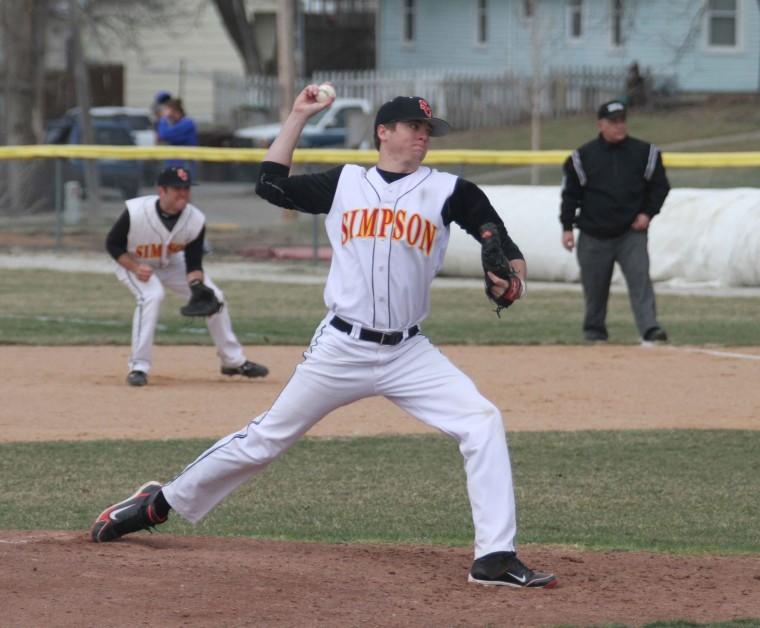 Postponed games did not affect the Storm’s efforts last weekend as senior hurler Mike Huyser recorded a no-hitter and Simpson (9-5, 2-0 IIAC) achieved its first back-to-back shut out since 1999.

Simpson pounded University of Dubuque 10-0 in game-one on Sunday, March 27 and followed with a 4-0 win in game-two. Huyser sealed the first win while senior pitcher Paul Brown recorded the game-two win with help from junior pitcher Chris Dorff.

Huyser pitched the entire eight innings in game-one and struck out six Spartans. He said he was glad to help the team win, but he described is efforts has “doing his job.”

“I feel that yesterday was a good example of me going out on the field and doing my job,” Huyser said. “Since I ended up with the no-hitter the spotlight has kind of been on me, but really it was a team effort. The entire defense made some good plays on some tough balls that might have gone for a hit if they didn’t make a good play.”

Huyser’s teammates were proud of him as well. Sophomore third baseman Blake Heitmier said it could not have come at a better time – starting IIAC competition.

“(The team) played very well,” Heitmier said. “Mike Huyser pitched an outstanding performance in the first game and we swung the bats well throughout the day, and defensively we were able to make the outs we needed. Paul Brown and Chris Dorff also pitched well giving up no runs in the second game.”

Game-two brought forth another solid defensive effort but this time without all the offensive pizazz.

Brown pitched five innings of scoreless baseball, striking out four Spartans. Dorff finished out his effort by striking out two Spartans of his own, giving up no hits. Crandell, junior right fielder Colton Calvert and senior Dave Johnson each scored runs for the Storm.

With the sweep, Simpson handed Dubuque its second and third losses of the year while also grabbing a stake in the top half of the IIAC standings. Head Baseball Coach Ben Blake said the team performed well by getting early wins in the conference schedule.

“The conference is so competitive from top to bottom,” Blake said. “It is always good to get a couple wins and take a series. We had a couple of great pitching performances and played pretty well overall, and to perform that well in a weekend interrupted by weather is commendable.”

Simpson will travel to Dubuque to face Loras on Friday, April 1 for game-one of a 3-game series. Friday’s game will begin at 6 p.m. with the final two games of the series being on Saturday, April 3 at 1 and 4 p.m.