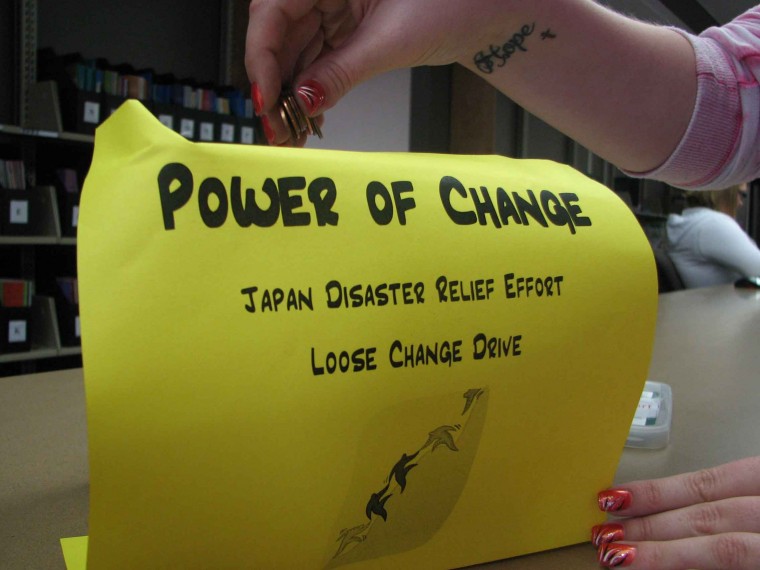 Simpson College’s Religious Life Community (RLC) is sponsoring a change drive to raise money for the relief effort in Japan.

The idea for the change drive came from the RLC President, junior Hannah Landgraf.

“I noticed very little happening, both on campus and in the surrounding community, regarding supporting the relief effort in Japan,” Landgraf said. “After looking for organizations to pair with in Indianola and Des Moines I realized it would have to be something we brought to campus on our own. As a member of the Religious Life Community I realized I already had an organization of students that wanted to help.”

Junior Carrie Wubben, also a member of RLC, believes that supporting things like the relief effort in Japan is an integral part of what the RLC does.

“We feel like it’s our responsibility to help out not only Simpson but surrounding communities and other places in the world because that’s what we’re all about,” Wubben said. “We’re all about service and mission and helping others, and we want to reflect that in the service opportunities that we promote on campus.”

A change drive seemed to be the most logical way to raise money on a college campus.

“Change is just something that we figure that all students just have laying around and may not have a place for it,” Wubben said. “I know right now I’ve got an entire cup full of pennies and dimes and nickels that I just can’t use because I always pick the quarters out, and especially now that students don’t need money for laundry, all those extra quarters that they would have saved, those are easily able to be out into this fund.”

All the money that is raised during the RLC change drive will go to the United Methodist Committee on Relief (UMCOR).

“Being a Methodist affiliated school, it made sense to give to an organization we were directly associated with,” said Landgraf. “Plus, UMCOR was one of the first organizations to give their funds directly to relief efforts in Japan.”

Chaplain Fritz Wehrenberg believes that the change drive is a good idea.

“This is an excellent expression of care for others that religious life seeks to provide,” Wehrenberg said.

Containers for collecting change have been placed throughout campus in Smith Chapel, the EWG lounge, the library, the theatre box office and the Mary Berry faculty lounge. They have also partnered with Irving Elementary School and an Indianola Boy Scout Troop to help in the collection effort.

Students and organizations are also encouraged to help in any way they can.

“Not buying coffee or a bottle of pop for a day and instead donating that money,” Landgraf said. “Keeping the change you receive after paying in cash and donating it to our funds. If groups or organizations want containers to place at certain locations they can contact the Chapel directly or can collect money on their own and bring it to put in the larger containers located in the Chapel entrance.”

The RLC change drive will continue to collect donations until Wednesday, April 27.