Volleyball looks forward to rest of season despite rough start 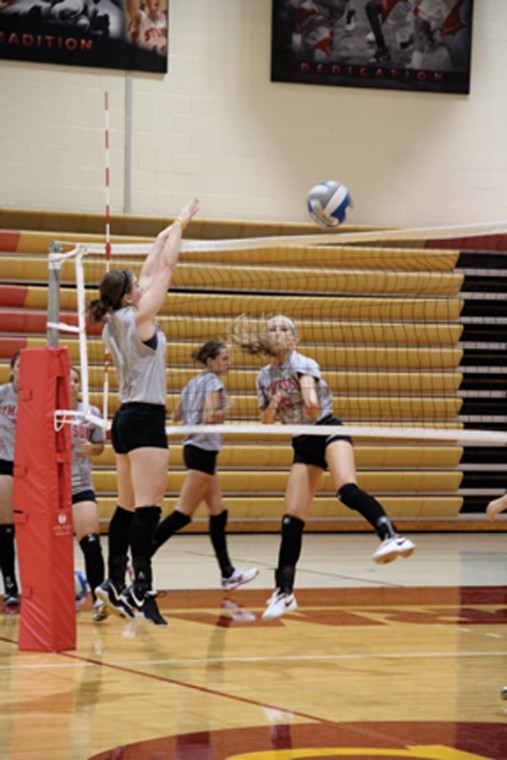 Despite a strong performance, Storm volleyball encountered trouble finishing games in the St. Benedict Invitational in St. Cloud, Minn. on Sept. 16 and 17.

“We had our great moments and then also our not-so-great moments, but we haven’t gotten blown-out in any match, so it is obvious that we can be a successful team,” Dunlavy said. “As a team, we needed to be able to finish a game and that is something we have struggled with all season. We make it to point 20 but we just can’t ever push ourselves the last five points to get a win, but once we can, we play amazing.”

Senior Ashley Padget led with 31 assists and junior McKaylie Croghan came in with seven kills. The Storm hit .101 as a team.

Head Coach Lana Smith said she was pleased with the weekend but the team will always refine what needs work.

“We have improved every week and every match,” Smith said. “Consistency is something we struggle with, but it is something that has gotten better every week.”

“I was very excited to win all-tournament honors,” Dunlavy said. “I don’t always get to look at stats during a tournament so it is always a surprise to find out when I make it and it fuels me into the next match.”

Dunlavy led the team with 63 kills, including a career-high 24 kills in the second match against Morris. She hit .346 on the weekend and tallied up four service aces. Dunlavy also came out with a team-high of 11 blocks.

“We definitely expect Megan to dominate offense with the shot-selection she has, which makes it hard for anyone’s defense,” Smith said. “We also expect a lot from her serving strategy and for her to score a lot of points.We are a bit inexperienced and look for Megan to bring us some experience to the court and some momentum.”

Being a freshman starter, Haley Danforth is getting used to the up-tempo pace of college volleyball. Team leaders are generally hard to find, but it comes naturally to some.

“The team leaders are definitely the seniors, but someone in particular I look up to is Megan Dunlavy,” Danforth said. “She knows the game and is really consistent. She knows how to pick us up when we’re down, and always has the right words to say in the team huddle.”

Over the whole weekend, Croghan had 34 kills and Danforth came in with 21. Padget totaled 129 assists and six service aces and Schuttler had a team-high of 45 digs.

“As a team, we just need to keep our energy up and have a lot of fun,” Schuttler said. “That fuels our playing and our intensity tremendously, and I’ll be looking to keeping the enthusiasm up on our side as we work for some wins the rest of the season.”

The team is looking forward to the remainder of the season.

“Overall, I think we got a lot out of last weekend,” Danforth said. “We played some really competitive teams and we improved each game we played.”