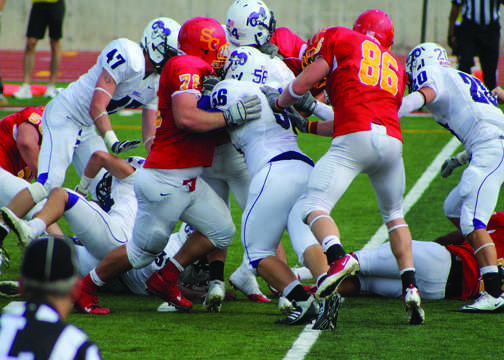 The Storm clinched a homecoming win against Cornell due to a clutch passing game and younger talent in the rushing game.

“It was really fun to have a win like that,” senior wide receiver Ben Coy said. “It has been a while since we have beaten an opponent that badly.”

Coy was a leading contributor in the win. Though Coy did not catch many passes, the two he managed were 78 and 70-yard touchdowns.

“Taylor (Nelson) gave me good balls,” Coy said. “I got good downfield blocking and was fortunate enough to have open-field to run with. It was all set up by Taylor’s good passes.”

Nelson found eight different receivers on the day. Outside of Coy, sophomore Mike Kuhn was the leading receiver for the Storm with seven receptions for 89 yards including a touchdown just before halftime to make the score 28-10.

The Storm had to overcome some challenges in the rushing game. During last week’s game against Dubuque sophomore Michael Chia went down with a knee injury. Younger players had to step up and take over his role.

Freshmen Ethan Calvert, Deion Lewis and Tyler Kenny all pitched in to run the ball 30 times for 136 yards and two touchdowns provided by Lewis and Kenny.

Lewis, who also led the team in rushing for the second week in a row, started off the second quarter with a one-yard run, which capped off an 18-play, 72-yard drive that lasted more than eight minutes.

Kenny had the touchdown that confirmed the win with a 25-yard run late in the fourth quarter.

Simpson’s offense had 605 total yards, which is the seventh-most in program history. It is also the highest offensive game Simpson has had since 2002, where the Storm racked up 609 yards against Loras.

Defensively, junior Mark Cronin was one of the leading tacklers for the Storm, but he still sees room for improvement.

“It was a good win, but we still have some things we need to work on,” Cronin said.

Cronin had seven tackles that matched sophomore Ted Haag for a game high. One factor that kept the Ram offense uneasy was the pressure put on throughout the game, especially in the second half.

Though homecoming is often considered a special game, Simpson’s football team tries to treat it like any other.

“We try to approach each week the same,” head coach Jim Glogowski said. “We try to get better and improve the fundamentals necessary to be successful on Saturday. It really is about staying focused on the process.”

Glogowski also said that homecoming brings out the spirit in the students, and he appreciates the student body’s support.

“Every year, I try to take my family to Yell Like Hell to show my kids what that event is all about,” Glowgoski said. “It really does bring out the entire student body.”

The players also consider the preparation for this game just like any other home game.

“During practice this week we have not been doing anything different than we usually would,” junior defensive back T.J. Alger said. “We have just practiced hard all week and studied film to give us the best chance for us to get a win on Saturday.”

Simpson’s next game is Saturday, Oct. 15 in Waverly against the Wartburg Knights at 1:30 p.m.