SARA brings back ‘In Her Shoes’ 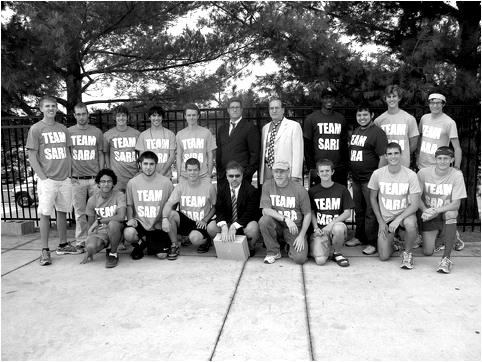 Teams of men will run in four-inch heels in an event called “In Her Shoes” to raise awareness for ending sexual assault and violence during halftime of the football game on Oct. 1.

“‘Walk a Mile in Her Shoes’ is what the original event is called,” said Ellie Olson, Ph.D., director of counseling services and adviser to Sexual Assault Response Advocates (SARA) “We’ve kind of adapted that to fit halftime of a football game.”

Along with raising awareness against sexual assault and violence, “In Her Shoes” is also raising money for a non-profit organization.

“We also try to raise a little bit of money for Iowa Coalition Against Sexual Assault, too, through some t-shirt sales,” Olson said. “Last year people were asked to put money in. Like we had little bins that represented each team, and whichever team raised the most money in their little bin was given a head start in the race.”

The different money bins for each team will be put out in a central location on campus during the week leading up to the event.

One thing SARA wanted to do differently for the relay race this year was to expand the number and variety of teams participating.

“We had quite a few people last year who made the comment that, like not even SARAs just like students here, who made the comment that it seemed like a lot of the people came from one specific area on campus like it was all the social science type people,” junior Shawna Sells said. “So we kind of branched out and we brainstormed ideas about who would be interested in doing it from different areas.”

Senior Anna Ronnebaum said SARA has a plan to attract more people to the event.

“What we did was we sent out emails just letting everyone on campus know any of the guys if they wanted to form a four member team they could,” Ronnebaum said. “There is a lot of interest this year, which is really exciting just because it’s growing. It turned out really well last year, and we’re just hoping for a bigger crowd.”

Along with new teams, some participants and teams from last year are planning to participate again this year. Senior Kevin Rice plans on returning with the Environmental Awareness Club because he wants to help SARA spread the word.

“I’m personally an advocate for awareness and openness and discussion and dialogue about sexual assault on college campuses,” Rice said. “I participated out of the cause that it is an awareness campaign to get their message out there.”

Rice advises new teams and runners to “bring some tape because the heels might go flying off.”

Sophomore Venice Washington will participate for the first time.

“My biggest concern for this event is the fact that they actually have shoes big enough for me,” Washington said. “I wear (size) 15, and I don’t have too much experience in heels.”

Olson feels it will be a great way for men to support the cause.

“It’s just kind of a fun way for men to show that they think that violence against women is something they want to stand against,” Olson said. “That they’re willing to kind of put themselves in women’s shoes and see what that’s like.”