Nelson breaks record, team has high hope for the season 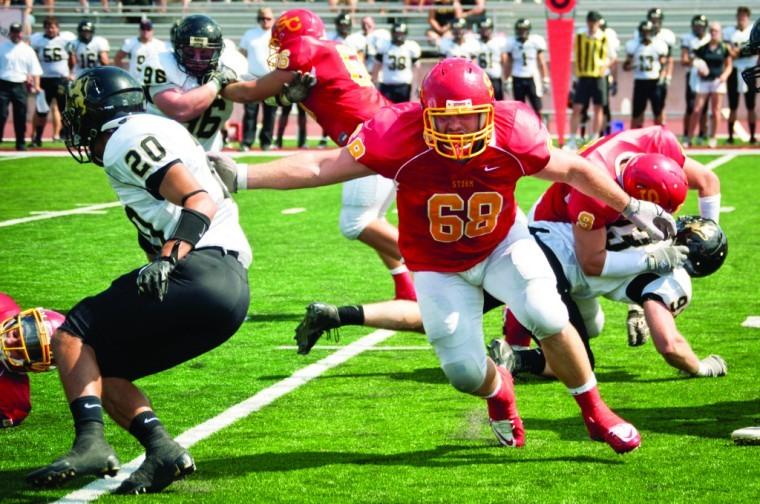 Sophomore quarterback Taylor Nelson is going down in the Simpson record books.

The West Des Moines native broke the 85 year old school record in the competition on Saturday versus St. Olaf. Completing 31 out of 51 passes in the Bill Buxton Stadium, Nelson bid farewell to the 1926 record held by Charlie McCoy. Nelson threw a total of 343 yards, the most a Simpson quarterback has thrown since 2004.

The Storm took charge early with a score of 7-0 in the first quarter. St. Olaf gained the lead in the second and third quarters with a run of 24 straight points. Simpson fought back in the fourth and outscored the Oles 16-7, but wasn’t able to make up the deficit in time. The final score was 31-23.

“I was shocked and couldn’t believe that I had broken the record,” Nelson said. “Completions can’t be done without someone catching it on the other end.”

Nelson learned of the news when a friend, who was watching the game, informed Nelson that he would go in the record books. Even after hearing that, Nelson was still disappointed about the loss.

“I felt like as a team we played really hard and aggressive,” Nelson said. “We just had a few points during the game where we didn’t convert or execute to our best abilities. The whole receiving core had a great game and it wouldn’t have been possible without the offensive linemen too.”

“Looking back on a game there are always things that you wish you would have done differently,” Beschorner said. “As coaches we want to put the players in the best situation possible to be successful, and players need to execute their assignment at a high level. However, we do feel like we are making progress.”

Being Nelson’s coach, Beschorner expects a lot from him on a daily basis. Only a sophomore, Nelson has stepped into a major leadership role on the team.

“I do feel more confident than last year just being able to have a year under my belt and catching up to the speed of the game,” Nelson said.

While taking the title of most completed passes, Nelson was also named the Iowa Intercollegiate Athletic Conference (IIAC) Offensive Player of the Week in the period ending on Sept. 11.

“He is getting better,” Beschorner said. “I think the game is slowing down for him.”

As Nelson said, he did not accomplish this alone. Sophomore wide receiver Brad Vogel was right on the other end of some of the completions, catching nine passes while accumulating 127 yards for the Storm.

“Taylor had a great game,” Vogel said. “He had confidence the whole game and was connecting with the receivers all game. I was glad I could help him get the record.”

The Storm fought hard throughout the entire game, but simply ran out of time. Vogel was disappointed that the Storm could have easily scored when they had the chance. With the ball in the red zone twice in the first half, the Storm didn’t capitalize and fell to St. Olaf’s defense.

“They had a good defense, but I feel that our offense out-played them,” Vogel said.

On the defensive side, junior Mark Cronin also set a personal record. Cronin made a career high with 12 tackles including two tackles for loss.

“It was disappointing that we weren’t able to get a win but we saw many positives on both sides of the ball and saw areas we need to improve upon,” Cronin said.

Achieving a goal does not mean the work is done for Cronin, who is setting more goals as the season goes on.

“My personal goal is to be leader of this defense,” Cronin said. “The team goals are to win conference and take this team and school to the playoffs.”

With the Storm 0-3, they hope to show everyone what hard work is.

“Despite the slow start, I believe we have an opportunity to surprise some people and make a run for the conference championship,” Nelson said.

The next game will take place in Dubuque, Iowa on Saturday, Sept.24 against the Loras Duhawks at 1 p.m.