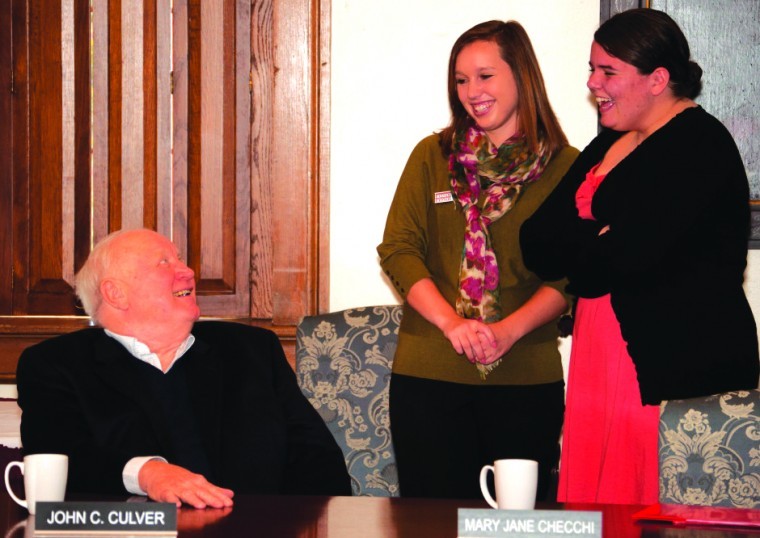 The John C. Culver Public Policy Center is making great strides in its second year on campus. The advisory board met on Thursday as part of its fall meeting.

The aim of the Culver Center is, according to their website, “to honor Senator Culver’s service and to promote civic education and engagement.”

Sen. John C. Culver was in attendance, and was satisfied with how the center is progressing.

“The expansion of the center is coming along quite nicely,” Culver said. “It’s a work in-progress. We want visitors to come through and see even more students become involved.”

Culver is pleased with how many students are becoming engaged in the political field.

“It’s been remarkable,” Culver said. “The four Culver scholars have been outstanding in terms of the participation and the energy they show when running around the campus. They’ve been doing all types of support services, working with the visitors who come to speak and working in the center. This is such an enthusiastic group as I’ve seen.”

These scholars form a group called the Culver Fellows who assist with the maintenance of the Culver Center while gaining experience and networking at the same time.

“No other school offered something like this, so it was something I couldn’t resist,” Olson said.

Peters had similar praise about the Culver Center.

“I thought there were excellent networking and communication opportunities, and also the internship program sounded like a good opportunity,” Peters said.

This new up and coming center was Peters’ main reason for coming to Simpson.

“I wouldn’t have come to Simpson if they didn’t have the Culver Center,” Peters said. “I would have gone to Drake instead, but I am glad I am here.”

The Culver Fellows have many ideas for continued development of the Culver Center during their time at Simpson.

“There’s plenty of ways it can go,” Thiner said. “We’re looking at more speakers who are more well-known as the years go on, and we’re trying to get the community more involved as the caucus comes up.”

Culver wants to see the center provide more resources for students who are interested in getting involved in politics.

“We live in a democracy that runs on engagement,” Culver said. “I voted in Congress for 18-year-old vote. I felt very strongly when we asked 18-year-olds to go fight for their country; it made sense that they should be able to vote for who they want to see lead their country.”

The lack of student political involvement at the local as well as the national level is disappointing to Culver.

“18-year-old men and women have the right and ability to make justifiable decisions,” Culver said. “It is critical for young people to get in the habit of voting. The quality of the government will be based off the decisions our voters make, but if we have no voters, then we’re in trouble.”

“We want to encourage students to take more action,” Olson said. “We’re trying to create new programs to make students aware that voting is important, especially with the election coming up. College students like to complain about a lot of things, so my answer to them is to go out and do something about it.”

Peters said that civic engagement should be on everyone’s agenda at Simpson.

“As we’re here to get a higher education, it’s important to point out that everything is affected by politics,” Peters said. “It’s important for us to know what’s going on and understand why the decisions are made.”

Thiner said that the networking opportunities available through the Culver Center are there even for students who may not be interested in politics.

“We have speakers coming in from every field,” Thiner said. “Students have the opportunity to meet people who can connect them to where they want to go.”

The Culver Center’s next event is a panel discussion about the 2012 Iowa caucuses on Thursday, Nov. 8 at 7 p.m. in Lekberg Hall.