Buxton Stadium has a new look 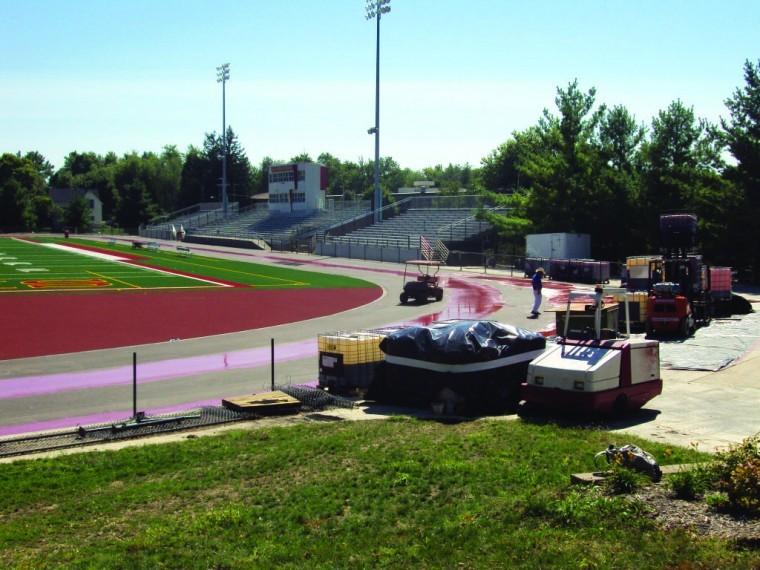 A completely renovated track and surrounding turf makes the upcoming track and field season one to look forward to for Simpson runners.

The new BSS 1000 running track is part of the Bill Buxton Stadium renovation, which includes a brand new advanced turf for the football field and additional landscaping around the facility.

The total cost for the FieldTurf and the BSS 1000 track surface is approximately $1.3 million. The large portion of the sum, an amount of $850,000 came from covering the track and the remaining $550,000 is for the FieldTurf.

“Roughly around 20 percent of the money will come from donors, and the rest of the balance will colloquially come from borrowing and accumulated surplus,” said Ken Birkenholtz, vice president of business and finance.

Birkenholtz also said that it cost $200,000 to tear out the worn-out track this past summer.

“We hope this investment will last us 20 years,” Birkenholtz said.

Those who will be making frequent use of the new facility, Track and Field Head Coach Dave Cleveland among them, are very excited about the upgrade.

“The track allows our current athletes to compete on a top-notch surface,” Cleveland said. “The new surface will boost our performance and prevent injuries that the old track couldn’t.”

Cleveland believes the improved track will give the Storm’s game a welcomed boost.

“We may not have had the newest surface in the past, but now that we have this, I believe having this new track will give our runners a sense of pride,” Cleveland said.

Cleveland also said seeing a commitment from the school is a good sign.

“It’s nice to know the administration cares about our program,” Cleveland said.

Runners used to the old track agree that a change was needed.

“The old surface was tolerable, but it was time for an upgrade,” said Ryan Edwardson, a senior distance runner for the track team. “It was pretty well worn.”

There were additional problems alongside the wear-and-tear the runners hard to avoid while running.

“We also had some issues, a few cracks and holes,” said senior hurdler Nicole Mulder. “At times they were hard to avoid.”

Manufactured by Beynon Sports Surfacing, the BSS 1000 is made of environmentally-friendly polyurethane which can battle any weather situation, and according to their website, needs no additional maintenance.

The process of laying down the track starts with full pour system where a liquid force reduction layer is applied. Applicators will then level it out and apply the texture to the top. The stripes then follow.

“The runners will be able to feel a noticeable difference when they start using the track,” Cleveland said.

The process of getting a new track has been in the works for about three years, but monetary issues often caused delay.

“Upgrading our facility has always been in conversation, but the idea really blasted off when the financial aspects got figured out,” Cleveland said.

The runners have also been anticipating this new track just as long as the coaches and administrators have.

“We’ve been talking about resurfacing the track since I was a senior in high school, so I was just excited to see it finally actually happen,” Edwardson said. “We just need to work on getting an indoor track.”

“The drawings have been made, and fundraising efforts have already begun, but it’s been talked about for a while now,” Cleveland said. “We’ll see.”