‘Die Fledermaus’ takes off at Simpson 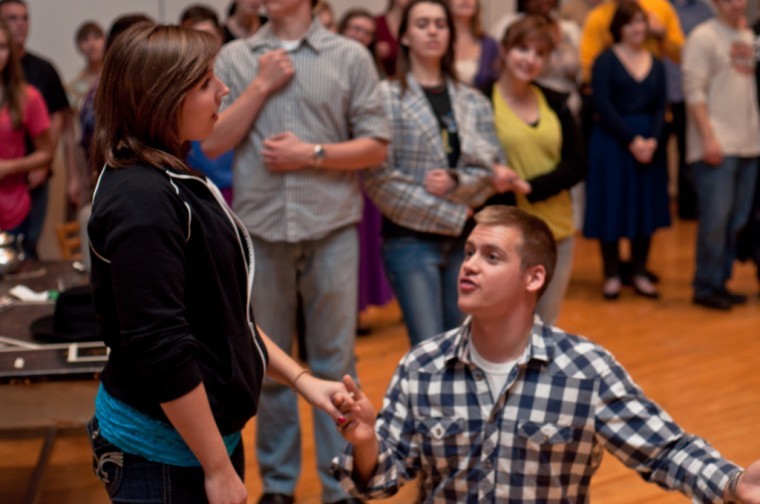 The Blank Performing Arts Center is once again transformed now with the set for the German operetta, “Die Fledermaus.”

Johann Strauss’ “Die Fledermaus, The Revenge of the Bat” is being presented by the Simpson Department of Music.

“Die Fledermaus” is sung in English with a student cast, chorus and orchestra. It’s musically directed by the college’s new opera director, Bernard McDonald, and has stage direction by assistant professor of music, Bruce Brown.

Junior Casey Coppess urges Simpson students to give opera a chance—especially if students haven’t experience an opera before.

“There’s so many negative connotations about opera that people say they ‘hate it’ before they even give it a chance,” Coppess said. “There are so many different types of opera and operetta and I know more people would enjoy it if they gave it a chance.”

Something that makes the operas at Simpson College unique, is that they are student produced.

“Yes, every show is different, and has its own unique experience,” junior Emily Anderson said. “This show is bigger than the ones we normally do in the fall, and a lot has gone into fine-tuning the show, and advertising for it. Students are cast in the main roles, and make up the entire chorus. We even have students working on photography and PR for the show. It is really a great learning opportunity for all of the students campus wide that are involved in it.”

It’s a new experience for some of the opera veterans since they get to work with a new director.

“With Professor McDonald being added to the opera department things are going very smoothly and being very productive,” junior Nicole Cavanaugh said. “This opera is very comedic and has some funny, interesting parts.”

“Die Fledermaus” presents a challenge as well as something new for the cast.

“Simpson has done a lot of operetta’s in the past but this production is a little bit more risque than some other stuff we have done here at Simpson,” Coppess said. “Like the “Dui-Du” chorus where everyone on stage is kissing someone. It’s been a fun experience getting to have a role in such a crazy show.”

“This opera is a great story, with wonderfully written and fun music,” Anderson said. “The staging and direction are great, and for me it is a chance to be a part of making more than just music, but to make some real art.”