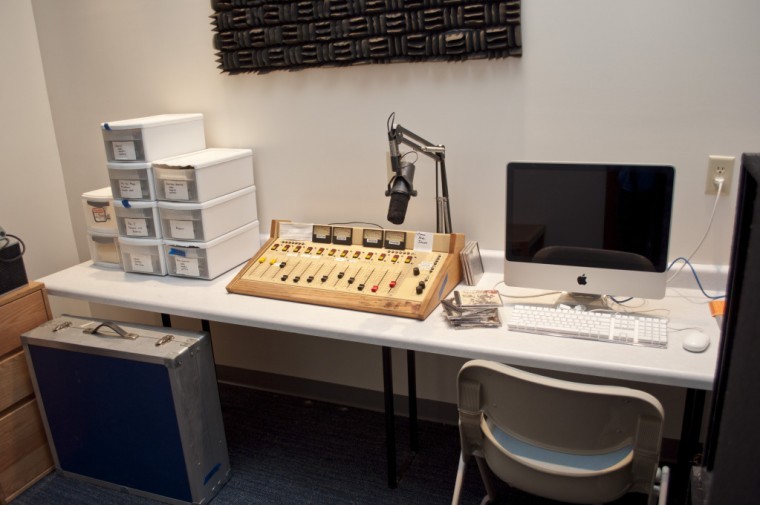 Nearly two months after KSTM, the campus radio station, was set to be on-air again this year, those involved are still waiting to hear even one broadcast from the station’s new location.

After the Brenton Student Center was demolished this past summer, KSTM relocated to the renovated projection closet in McNeill Hall. The new location for the station has caused several issues, delaying on-air time.

“We were promised to be back on-air by the time school started,” junior KSTM station manager Jesse Stewart said. “Now it will possibly be by January before this can happen.”

The new home for the station has presented problems for Stewart and others who have a part in KSTM.

“The biggest issue is that the projection room is not soundproof,” Stewart said. “If there is a lecture in the Pioneer (Conference) room or McNeill 110, it’s like someone is speaking right over your shoulder. We can’t use the station until it’s fixed.”

For students who have broadcasted on the station in the past, the shows have been a staple in the time spent at Simpson.

“I’ve had a show since my freshman year, always ‘Mutt and Dutch,'” senior Kirk Ford said.

Not having a usable place to hold radio broadcasts has taken away students’ chances at gaining a practical skill in this line of communications work.

“(Radio broadcasting) is what I want to go into,” Stewart said. “Not being on-air is hurting my chances, without the hands-on experience. There are internships but having a radio station right on campus is extremely beneficial.”

KSTM has been a part of the communications department on campus since its creation.

“Radio and broadcast media has changed greatly over the 18 years KSTM has been on campus,” said Jim Thorius vice president and dean of students. “As the communications department works to integrate radio into the curricular program of communication, the station is a valuable resource.”

Even if students are not planning on going into the radio broadcast field, there is still a benefit to having a spot on the radio.

“It gives students a chance to DJ and be on-air,” Ford said. “Personally, it has helped me overcome anxieties and become more confident in my speaking abilities, which can translate to countless other areas such as speaking in front of groups, class and employers. Learning to be conscious of everything you say is immensely important.”

If the projection room does not get repaired by February of 2012, the KSTM will lose its broadcast license.

“The process by which to get a new license is really complicated and will cost a good amount of money,” Stewart said. “We are trying our best to get automated sound so we won’t lose our license. It’s the only option.”

Other options have been tapped into in the radio station’s absence.

“Podcasting started in lieu of not having KSTM,” Stewart said. “We looked at online streaming, radios are doing a lot of that now. (Doing online streaming) would require having a separate license, more equipment and finding a way to get more money. It’s a possibility to shoot for in the future.”

Not having a working location for KSTM to be on-air is a potential risk for Simpson College.

“At other colleges’ communication departments, they have a fully functional newspaper and radio station,” Stewart said. “Some even have a working TV station. For Simpson to lose KTSM would be a huge blow to the communications department and to its competitors.”