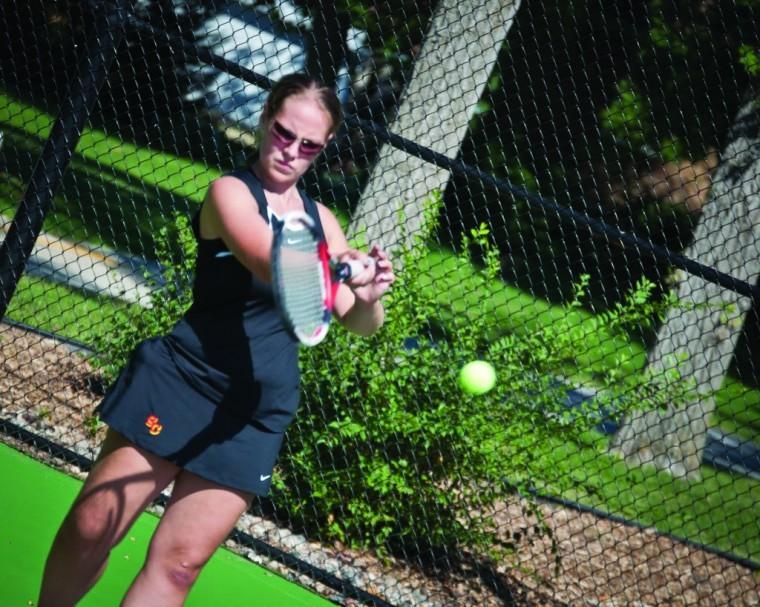 For two weeks in September the women’s tennis team accomplished a five-match winning streak, raising its total win amount to 6-4 on the season while moving even in conference play to 3-3.

Currently, the Storm is in sixth place in the conference due in large part to the winning streak.

Simpson received their fourth and fifth consecutive wins on Sept. 24, beating Morningside and Buena Vista, each by a score of 7-2.

“We’ve been playing very well against some tough opponents,” said head coach Lindsay Chase, Simpson tennis alumna. “It was a good run. The girls worked hard, and it paid off with those five victories.”

“I think it was definitely a confidence booster knowing we could come out and put what we’ve worked so hard on in practice to use and have it be effective,” Struebing said.

Struebing’s record in singles play for the Storm this season is 4-5, fifth among No. 1 singles players in the Iowa Intercollegiate Athletic Conference (IIAC).

One aspect of the game that Simpson has been struggling with is doubles play.

“In tennis, it’s important if you can get a good jumpstart in doubles play,” Chase said. “We’ve been playing very well in singles play, so we’re just trying to make our doubles even stronger.”

Players agreed that a lot of time in practice has been devoted to focusing on doubles play.

“We had good practices during the weeks leading up to the matches and worked on specific skills and situations that helped when it came to the matches,” senior Lynae Gruber said. “For instance, we concentrated a lot on doubles. If you start the match off with doubles wins it takes some pressure off for singles. Jumping out to a 3-0 lead is huge.”

Simpson is 16-9 in doubles play this season and in singles play carries a record of 32-21.

Seven of those 16 doubles wins have come from Gruber and junior Lindsay Nash. Their seven wins are second best in the conference.

“They’ve been strong in that position all year,” Chase said. “They’ve gone out there, they’ve worked well and have communicated well.”

Chase also said that Nash and Gruber have been boost-starting tournaments most of the season.

“It’s one of those areas where we look to try to get wins, and with them winning, it helps us as a team get off to a good start in tournaments,” Chase said.

Chase wants one someone on the team to become comfortable with the idea of leadership for the team to really be successful.

“I’m trying to find that one person to step up and go to the next level,” Chase said. “Competitively, I see players who take care of business, but no one has emerged to become that leader I’m looking for.”

Chase also has the confidence and support of the team.

“Coach Chase knows what specific things we are good at and how to use our skills and exploit them giving us the upper hand, when going against our opponent,” junior Tiffany Bost said.

“She reminds us that we have the strokes and we have the strategy it is just having the confidence to use those strokes,” Nash said. “Also she reinforces to us that we need to forget about the last point, move on to the next, and to win the ones that really count.”

The team will next travel to Cedar Rapids Oct. 7-8 to compete in the IIAC Individual Tournament.