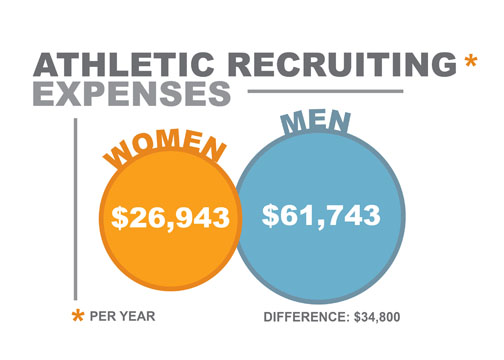 by Madison Boswell and Morgan Fleener

133 athletes. 12 coaches. Three student coaches. One major difference separates football from the other athletic programs at Simpson: its budget.

With nine women’s sports and 10 men’s sports at Simpson College, it would seem that there would be a similar outline financially for the different genders for recruiting, coaching and athletic expenses and salaries.

According to data provided by the U.S. Department of Education, Equity in Athletics Data Analysis, the average annual recruiting expenses for men were $61,743 compared to $26,943 for women’s sports.

Given this data, it may appear there is a significant imbalance and inequality between the two different gender’s expenses in respective sports.

However, when looking at these numbers, one must take into account the large number of football players recruited each year that help shape this tuition driven campus.

Athletic Director John Sirianni said he has no doubt that football is the main reason behind the differential between the two genders competing at Simpson College.

“We work pretty hard at trying to have a policies and procedure and to utilize a budget formula that allows sports to be treated equally,” Sirianni said. “The salary structure for our coaching staff is very equitable, one year the women’s coaches may have a slightly higher salary per FTE, while the next the men may be slightly higher. For direct institutional support, we actually spent more on women’s sports excluding football this year.”

Head men’s basketball coach Charles Zanders also feels that football has played the most dramatic impact on shaping these statistics.

“They (football) garnish the big recruiting budget, because they have more people and they bring in the most money,” Zanders said. “If you consider the number of football players, they are pretty vital to a college’s lifeline, so I can see where a large recruiting budget could be entailed because ultimately they bring students in here.”

With football pushing the men’s sports expenses up, head women’s basketball coach Brain Niemuth still feels there is equal opportunity and treatment among the men and women’s athletic events.

“I get what I need on the women’s side to make it similar to what the men’s team gets, so I can’t think of anything (unequal),” Niemuth said. “I know from my perspective as a women’s coach, I get just as much as what the men get. Football’s just one of the sports that throws a lot of things out of whack with Title IX.”

Title IX is a law that supports the fact that any person should not be excluded in participating, benefits or be the subject of discrimination in any education program or activity because of gender.

This law helps provide equal opportunity for both men and women, including sports.

Head football coach Jim Glogowski is not surprised about the impact the number of players on the squad makes on the athletic budget.

“We have the largest roster in the department,” Glogowski said. “A huge part of our budget includes equipment for each player that fills a spot on our roster. I would anticipate that with the equipment demands that our costs per player are going to be a bit higher than the other men’s sports, but everything is magnified because of the number of players we have on our team.”

“Football’s expensive,” Sirianni said. “When you start talking about football, we have five people out on the road recruiting; there isn’t any other sport that has even close to that. A different factor included in this, is that football recruiting in all colleges and universities is at a higher level than the other sports in terms of high school visits, visits to homes, or visits to games; the whole thing is at a much higher level.”

Zanders said that if someone wants to coach enough her or she will take the job.

“There’s not a coach in the world that would look at a reasonable salary and say ‘that’s not enough money,'” Zanders said. “If they get the opportunity to be a coach and they really want to coach, they’re going take it, male or female.”

For more information regarding these statistics, please visit http://ope.ed.gov/athletics/Index.aspx