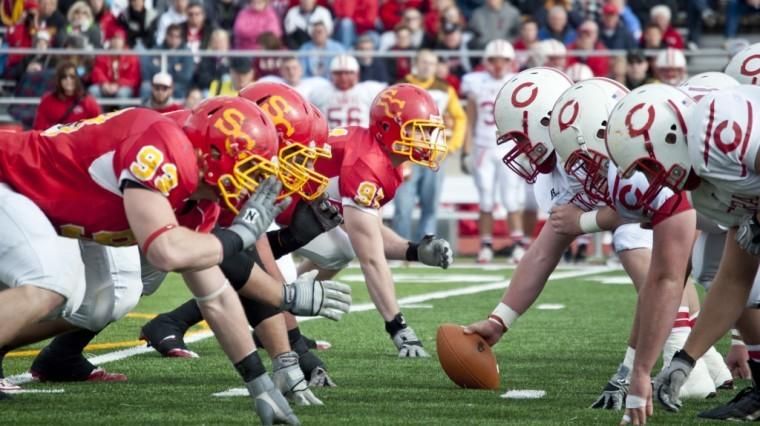 It was a bitter-sweet ending for the Simpson football team as it lost 37-14 to long-time rival Central last Saturday in Bill Buxton Stadium.

Senior quarterback Nate Snead from Central totaled up 368 yards and had three touchdowns. Snead also rushed for 188 yards and threw for the Dutch (7-3, 6-2).

The Storm entered the red zone six times but only managed two touchdowns. With Simpson inside the Central five, the Storm could not overcome Central’s defense.

“Central was one of the top defenses we went up against this year,” junior wide receiver Taylor Rogers said. “Offensively, we were able to throw the ball pretty well, which we have all year. They didn’t do much to stop us. We just beat ourselves a couple times which ultimately cost us the game.”

After Central’s first touchdown Simpson missed its opportunity. With Rogers making the catch at the 2-yard line for a touchdown, a fumble by sophomore running back Michael Chia allowed the Dutch to make a 99-yard drive to lead with 14-0.

With 7:31 left in the first half, Central’s junior running back Ross Doehrmann, Snead and freshman running back Josh Osborn increased the lead to 21-0.

Despite the slow start for the Storm, Simpson ended up mounting two quick scoring drives. Sophomore quarterback Taylor Nelson connected with sophomore wide receiver Brad Vogel for a 16-yard touchdown, and the Storm defense held the Dutch to a punt. Senior defensive back Ben Coy caught a 17-yard touchdown pass by Nelson with 15 seconds left in the first half.

Before the Dutch could get going, junior linebacker Mark Cronin broke up the third down pass, making Central punt the ball. A 50-yard pass from Nelson to Vogel on the ensuing drive put the ball at the 7-yard line.

Putting the Dutch on their heels, the Storm’s drive fizzled out when the 20-yard field goal by senior James Gale was blocked. Three short plays later, Snead ran by the Storm defense for a 70-yard score, giving Central a 27-14 advantage over the Storm.

After driving deep into the enemy’s territory, Simpson’s drive came to an end after a fourth down incompletion.

Both sides of the field were cheering until the very end for the Storm and the Dutch.

“The atmosphere was something that will stick with me,” Rogers said. “From the players in the black-swag they had going on, to both crowds being into the game is something that, as a player, gives you a little more energy and gets you get a little bit more hyped up.”

Senior defensive lineman Ty Larson thought the Storm did what they could to prepare for the big game and wished things could have gone differently.

“The team prepared all week by getting the scout team ready for practice, studying film as a unit and running through game schemes with the coaches,” Larsen said.

Senior linebacker Braden Everding led the defense with 10 tackles, improving his own school record of 286. Larsen and senior defensive back Colton Calvert each had eight.

“I think we were prepared, but we made some costly mistakes that were unable to overcome,” Everding said.

Furthermore, 25 seniors wore the red and gold for the last time against Central.

“The seniors all played their hearts out,” Rogers said. “It wasn’t anything different from any of the previous games as they bring it to every game and every practice. We are definitely going to miss them next year. Not having them will be tough, but they all have done a good job of preparing the younger guys to take their spot next year.”

With Simpson being picked to finish seventh in the Iowa Conference in the preseason polls, the Storm instead won five of its last seven games.

“It’s been a great four years,” Everding said. “I wouldn’t trade it for anything. I would definitely say that some of my teammates are my best friends. I am going to miss everybody greatly.”

Larsen agrees with Everding, and said he will fondly remember his time here.

“I have enjoyed every minute here playing for Coach Glogowski and being a part of this team,” Larsen said. “We had our ups and downs as a program but if I had the chance to go back and do it again, I wouldn’t change a thing.”