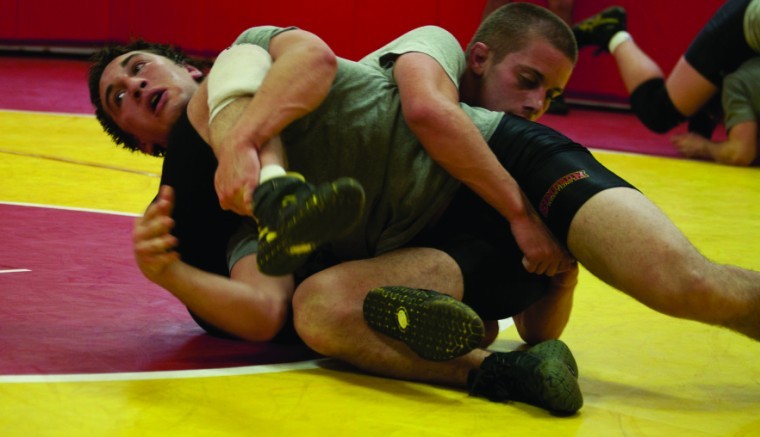 by Jeremy Dubois and Alex McCarty

With only one senior and three juniors the Storm wrestling squad is light on experience but focused on developing new talent.

Preseason workouts started Oct. 10 and head wrestling coach Clint Manny said he is impressed with the work ethic and improvement the team has shown so far.

“I’m very pleased with the start to the season,” Manny said. “We are really focusing on developing strong team atmosphere and paying close attention to detail in our technique and drills.”

Upperclassmen like junior Jeff Sand feel confident about the squad this year.

“Practice is going good,” Sand said. “We have a great group of guys, and everyone is working hard.”

Senior Ryan Haworth expects the squad to reach its higher goals with the more competitive team available this year. The big difference is the number of athletes on the team.

“Our numbers are up from last year so we have depth at many weight classes,” Haworth said. “This is a nice thing to have considering we didn’t as much last year.”

Manny expects a strong performance from this year’s squad. He hopes his team can achieve several specific goals it set, including a top five finish in the Iowa Conference, a winning duel record and a team GPA of 3.0 or higher.

“Our main goal for the year is to put a few guys in the national tournament and see what they’re capable of doing on the national scene,” Manny said.

With seven freshmen out of 18 total wrestlers, the Storm will need these young athletes to step up and provide solid performances in order for the team to be successful.

“Coach Manny did a great job of bringing in a solid group of freshmen,” Haworth said. “We will be relying on them to step up this year and make a statement in the always tough IIAC.”

Manny has seen some impressive performances out of some of the recruits, and is eager to see how they will perform under the spotlight.

“I’m really looking forward to seeing our young team in action,” Manny said. “Highlighting our incoming class is (the) Missouri state champion, Brian Haynes who will wrestle at 157 lbs. We also have two talented freshmen at 125 lbs. in Mike Nemer and Devin Rausch.”

The freshmen will be a key aspect to Simpson’s success this year, but team will be relying on the upperclassmen to provide valuable experience and leadership.

Junior captain Cory Stratton made the move down to the 149 lbs. and is expected to be much more competitive in the conference this year. Manny is also pleased by the performances so far of Sand, freshman Derek Entz and sophomores Stephen Blayer and Justin Bruce.

The Storm understands it will take a total team effort to have all members reach the goals that have been set for this year.

“Our goal is to simply win more than we lose,” Haworth said. “And of course we want to send as many guys to Division III National Tournament in Lacrosse, Wis. as possible.”

For the first meet of the year Simpson will travel to Galesburg, Ill. for the Knox Invitational on Nov. 12.

The Storm’s first home duel is on Nov. 15 against Cornell College. Haworth expects to see a lot of Simpson students show up for the meet.

“We would like to get as many people there as possible to give us a home advantage,” Haworth said.