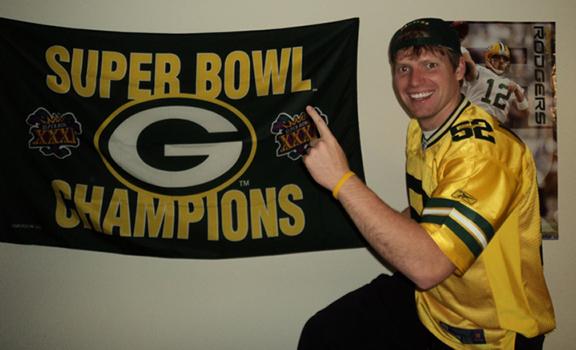 The Green Bay Packers are off to a great start to their season this year.

With an 9-0 start the Pack is the hottest team in the NFL right now. Led by Super Bowl XLV MVP Aaron Rodgers, the Green Bay offense is lighting up the scoreboard, and although they haven’t shown it lately, the defense is full of playmaking superstars led by future hall of famer Charles Woodson and the ferocious pass rush of Clay Matthews.

Most experts claim that Rodgers’ performance, 2,619 yards and 24 touchdowns, are the key to this team’s success so far this season. I disagree that the stars like Greg Jennings and Jermichael Finley are really the key to success so far this season. There is no way that Mike McCarthy’s game planning is why the Packers are off to the league’s best start.

Who could the x-factor be, then?

Is it Randall Cobb, the rookie special teams sensation? Is it BJ Raji, the run-stuffing nose tackle for the Packers? Could it even be the world’s best fans, the Lambeau faithful G-Force?

No. This man is not even an official member of the Packers organization. The cornerstone of this incredible run of 14 straight games, dating back to last season, for the Packers is yours truly:

Now you’re probably sitting there getting ready to put the paper down and walk away shaking your head, but hear me out. I know this is a bold statement, but only for good reasons do I make this claim.

Let’s go back to the beginning of this turn-around for the Packers, all the way back to Christmas Day 2010.

The usual itinerary is open presents in the morning, go to grandma’s house, eat way too much and then open more presents. But this day was different. It was life changing. It was franchise changing.

My cousin Ryan had given me a Clay Matthews jersey. It was a gold, alternate jersey, something that the players would never wear on the field, but it was different, something no one else was wearing, and it was legit tackle twill material. This thing was the real deal. If only I knew what kind of power it had.

The next day the Packers had a must-win game against the New York Giants to keep their postseason hopes alive. Obviously I was watching the game, and I decided what the heck, and I put my new jersey on. Well, the Packers went on to win 45-17. Coincidence? I think not.

Who was the MVP of that game? It wasn’t Erik Walden who had three of the defense’s six sacks. Nope, it was me. That’s right, the kid sitting in Corning, Iowa, 528 miles away from Green Bay, made the difference in that game.

My Clay Matthews jersey and I were willing the team to victory. I was in on every tackle, blocking on every touchdown. It was me, and I deserve some recognition.

So now you think I’m selfish, arrogant and downright crazy for talking about how a kid in a different state sitting on the couch, eating deer jerky and cheese dip could affect the outcome of the game. Well, again, listen to the rest of my story.

With the Packers now in the NFC Playoffs, I felt even more obligated to watch every game, with the team’s difference maker on my back, and do my part to bring home another win. Making it all the way to the Super Bowl, the Packers led by their MVCP (most valuable couch potato), beat the Pittsburgh Steelers and continued on their journey to world champions.

This is where even I became a little skeptical. There was no way this jersey could possibly have any effect on Green Bay’s run to the title. I had to wait until next season to find out. I decided to test my role on the team, and I decided to not wear my jersey for part of the first regular season game of the 2011 season.

Boy, did I almost let the team down.

I put on the jersey for the first quarter to get the Packers off to a good start. Well, 21 points later I felt they had a comfortable lead over the New Orleans Saints. I took off the jersey, and boy did the wheels fall off the cart.

Drew Brees, like a shark smelling blood, could sense that I had given him an inch and took a mile. The Saints came roaring back to tie the game.

I jumped into that jersey quicker than Aaron Rodgers’ slant pass. I could see Coach McCarthy staring into the cameras looking for me to pull this team back together. Having my jersey on is all it took. The next drive the Packers scored and never looked back.

Now, I wasn’t in the post game locker room, but sources let me know that I had received an honorary game ball for my efforts on that Thursday night. Later that week I wrote a letter to Ted Thompson, the general manager of the Packers, to ask for some compensation for leading my team to victory.

Needless to say he never wrote back. My agent is now trying to contact him to hopefully negotiate a contract with the organization. I mean, a league minimum salary with a bonus for when the Packers win this year’s Super Bowl is all I’m asking.

With great power comes great responsibility. These are words I have come to live by with all of this pressure on my back. I take constant ridicule for wearing a bright gold jersey every Sunday. My coaches poke fun at the fact that I am wearing a jersey with another man’s name on the back.

Sports writer Rick Reilly wrote rules on wearing jerseys. One of his comments: “Wearing a jersey used to be for kids. You be Tom Brady and I’ll be Darrelle Revis. At 6, it’s adorable. At 36, deplorable.”

I reject that opinion, especially when it comes down to wins and losses. I have an obligation to this team to take the heckling and let it roll off my back in order for the team to be successful on Sundays.

Whether you believe me or not, you can’t deny the fact that there has to be some correlation between my jersey and the Packers’ performance on game days. Can anyone else really come up with a reason for 14 straight wins?

Players have come and gone, coaches have changed their styles, but I have put in the time and effort to confidently say that I am the reason the Packers have not and will not lose a game this year.