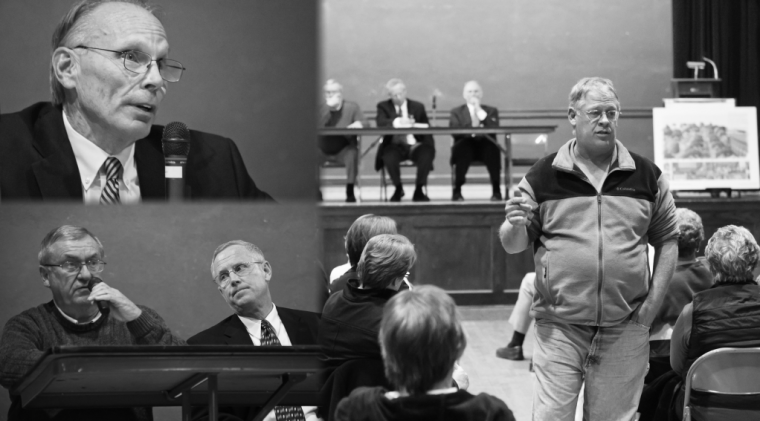 The forum was held at the Methodist church and started at 7 p.m. on Nov. 10.

Almost all of the seats where filled at the forum, although there were very few Simpson students in attendance.

Audience members saw a conceptual drawing displayed by the doorway of what C Street could look like if the proposal by Simpson passed. However, many citizens were still reluctant about many issues the closing could cause.

“I don’t think we have any questions or concerns whether Simpson plays a great part in our community,” resident Richard Bough said. “We really appreciate you. But that’s not the issue. The issue is closing C Street from one end of town to the other.”

Byrd and Bresnan both denied that the new plan would cut people off from events on campus, pointing out that under the conceptual drawing design, there would be a “plaza-type drive” up to a cul-de-sac near the center of campus.

“Clearly, we want to work with the city and make sure people can get to where they need to be,” Byrd said.

Several challenges were brought before the panel by anxious citizens, including a report by the Indianola fire chief and police chief, both against the closing of C Street.

The resident who brought it to attention did not elaborate what it was about the plans that troubled the chiefs, and both Byrd and Bresnan declined to clarify the problems in their answers.

“I have read the reports of the police chief and the fire chief,” Bresnan said. “I will freely admit that we’re not in agreement yet on what the best way to proceed is. They’re very intelligent people, I’m not so bad myself, but we still have a way to go.”

Citizens repeatedly voiced concerns that the closing would increase traffic near Irving Elementary School, possibly putting young children at risk of being hit, and exacerbate what residents called a “giant parking problem.”

Byrd denied any problem, saying that school had enough parking to accommodate all students enrolled and that losing C Street would not overcrowd parking lots.

“I know we have lots of available parking spots every hour of the day,” Byrd said. “Where students want to park, I have no control over it. We definitely feel that we have enough parking for the city to take parking off those streets.”