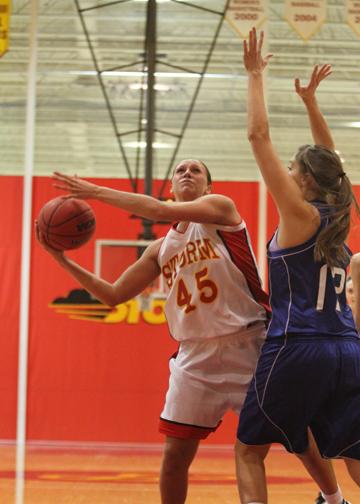 After a 22-7 (14-2 IIAC) finish to last year’s season, Simpson’s women’s basketball team is prepared for more success this year.

With construction on campus underway and temporary facilities taking up valuable space in Hopper Gym, the team has to be flexible with its practice schedule and available facilities.

The Storm shared the NCAA conference title with Coe College last year and both coaches and players have high hopes for this year’s performance.

“Last year we shared the conference title with Coe,” junior Jamie Elbert said. “My parents taught me how to share, but I don’t plan on sharing that again this year. I am really excited to build on the season that we had last year. We have a really strong group coming back and our transfers and freshmen have really picked up what we try to do and have made a great transition onto our team.”

Although the ultimate goal may be an NCAA championship, striving for constant improvement is the team’s plan to get there.

“With the obvious goal being winning championships, they (the players) have to understand that there are steps you have to take by working hard to get there,” Niemuth said. “It doesn’t just happen. My goals are always the same every year. I want them to strive to reach their full potential and be as good as they can be. If that happens, then conference championships take care of themselves.”

Although many players have personal goals, Niemuth stressed the importance of team chemistry and putting team goals first.

“The players are going to have to be unselfish; they’re going to have to sacrifice for each other for us to be successful,” Niemuth said. “Because we do have a lot of talent, we can’t let personal goals get in the way of team goals.”

The women of Storm basketball and Niemuth have many strategies for reaching this season’s goals of improvement and returning to the championships.

“Our team goals are to win a conference championship and a national championship,” senior Ashley Rogers said. “We will reach these goals by looking past the x’s and o’s. I have confidence in Coach Niemuth to coach us on the court, but we will need to get to know our teammates and how they work, have our teammates’ backs and be able to transfer that onto the court. That’s how we’ll win championships.”

Not only is the Women’s Basketball team building off a successful season, but the history of success of Simpson’s women’s basketball program in years past.

“Success goes way beyond last year. What we are trying to do is build on success we’ve had,” Niemuth said. “Success becomes a way of life, so you want to make sure you don’t take it for granted. What we’re trying to do right now is remind them that a lot of hard work goes into being successful.”

Storm women’s basketball opens its season on Nov. 15 in a double header with the men at AIB College of Business.