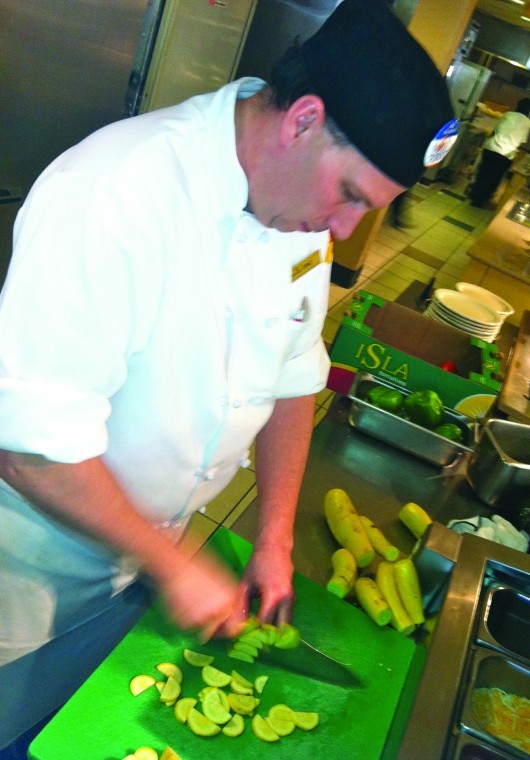 As students packed their bags to head home over fall break and staff took a few days off, Eric Dickson flipped a final omelet and headed for New York.

Dickson, 44, is Simpson College’s live chef in Pfeiffer dinning hall. He also happens to be the college’s resident skydiving professional.

At a young age Dickson realized his passion for food, which eventually led him to his other profession as a skydiver.

“I remember at nine years old making apple pie in my mom’s kitchen,” Dickson said. “Cooking came natural to me, because I grew up with it.”

As a fourth generation French chef, Dickson credited his knack and desire for the culinary arts to his heritage and said cooking was in his blood.

At age 18, Dickson joined the military. Here he could develop his skills as a chef and “explore.” His first assignment sent him overseas.

While working here he saw Navy SEALs free fall from 90 feet, and heard these same men were skydiving out of massive F18s at 600 mph.

This immediately sparked Dickson’s interest. The urge for a thrill led him to set aside three years of his life to master the practice of skydiving.

“When I jumped the very first time, a thousand things ran through my mind,” Dickson said. “On my first jump, my parachute failed, and my whole life flashed in front of my eyes.”

Fortunately for Dickson, he was able to pull his emergency parachute. He was safe and hooked on the newfound thrill.

More than 6,000 jumps later, Dickson is considered a professional high altitude, low opening or HALO jumper, which only 1,000 people in the United States can say.

Some of these jumps have been routine, some have been for strictly top-secret missions, and others have led to injuries.

“My emergency chute has failed once before, so I aimed for water,” Dickson said. “I hit the water at 80 miles an hour. Had to put pins in my left leg.”

One time Dickson had the rare opportunity to go on a mission with a Special Forces unit where he jumped during the dead of night. This was the most he could say about this particular jump due to the sensitivity of the mission.

Skydiving started out as a hobby for Dickson, and over time it became a profession. He was quick to clarify that his true passion will always be found in cooking.

Today, Dickson has been to more than 92 countries, some of which are smaller than the city of Indianola. He’s also the proud owner of 10 full passports, but the thrill-seeking chef isn’t done yet.

“At age 50 I want to start living my life,” Dickson said. “I have spent 21 years in the service, and professionally cooking since I was 13. I’m marking my life at 50 to step away and teach.”

He will always be cooking, and hopes the students of Simpson leave Pfeiffer each day satisfied.

Once this chapter of his life closes, he plans to open a new one as a professional skydiving instructor, so everyone can experience the thrill.

“Get out there and do it,” Dickson said. “It’s the thrill of the lifetime. Put it on your bucket list: fly like a bird.”