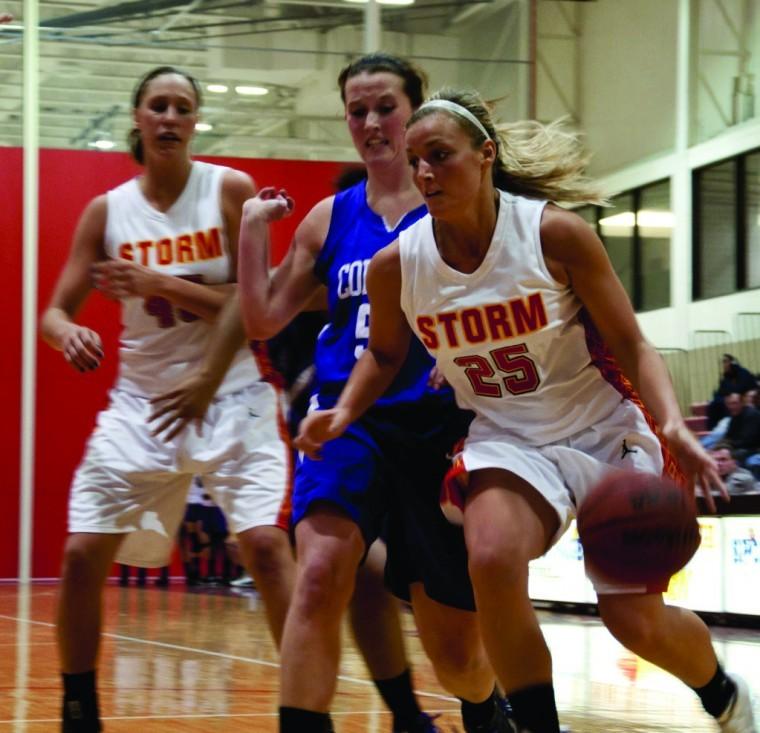 The Simpson women’s basketball team is off to another hot start this season, coming out of the gates with a 5-2 record.

The season may not have started exactly like the Storm wanted it to, but the team has turned it around again this season.

Junior Alicia Goetz said that with enough effort the team can be a top contender.

“When we put a full game together we can really make some noise in the conference,” Goetz said.

The team started the season off in Des Moines with an 86-83 win over AIB, and then traveled to Decorah to play in the Luther Classic. The Storm played the Falcons of Wisconsin-River Falls, and despite a furious comeback, fell short and lost 79-73 on Nov. 18.

The Storm took out their frustrations on Bethany Lutheran, defeating the Vikings 94-52. Junior Jamie Elbert came off the bench to score 17 points to lead the team.

The bench has always been a huge factor for the women’s team and this year is no different.

“You can run the first five (players) down, but our bench is going to be better than anyone’s in the conference,” senior Stacey Schutjer said.

The Storm used these games as momentum and has not looked back since. Hosting the Simpson Storm Classic, the women came up with big wins over Carleton College and Grand View University.

The 85-70 win over Carleton was the Storm’s 13th consecutive home-opener win. Schutjer led the Storm with 18 points and junior Kate Nielsen threw in another 17 points to help get the win in the first game of the classic.

Elbert again led the team in scoring, going 5-7 from 3-point land to give her 19 points. Senior Ali Sokol recorded a double-double with 11 points and 11 rebounds. Schutjer and Elbert were named to the All-Tournament team, and Schutjer garnered Tournament MVP honors.

“It’s always nice to have an All-American player to take the pressure off some of the other players,” Niemuth said.

Schutjer credits much of her success to her teammates.

“We have four other girls on the court that can score, and I have confidence in them and they will take care of business,” Schutjer said.

Simpson and its three-game winning streak carried the momentum into the beginning of the conference season.

Cornell College gave the Storm all they could handle, taking Simpson into overtime after the Rams mounted an 11-point comeback.

Scoring eight of the team’s 10 points in overtime, Nielsen willed the team to a 63-60 victory at home.

The win over the conference foe was another sign of how the team has kept the ball rolling early on this season.

“We are paying more attention to details now, taking care of the little things that can make a difference in winning and losing a game,” Niemuth said.

The Storm are looking for their fifth straight Iowa Intercollegiate Athletic Conference (IIAC) championship this season, and Niemuth only sees the team getting better as the year progresses.

Schutjer agrees with her coach on what the team needs to do to become a championship-caliber team.

“Ball pressure and forcing weak hand, just little things,” Schutjer said. “Once we improve those things we can be a heck of a team.”