Both teams working on improving 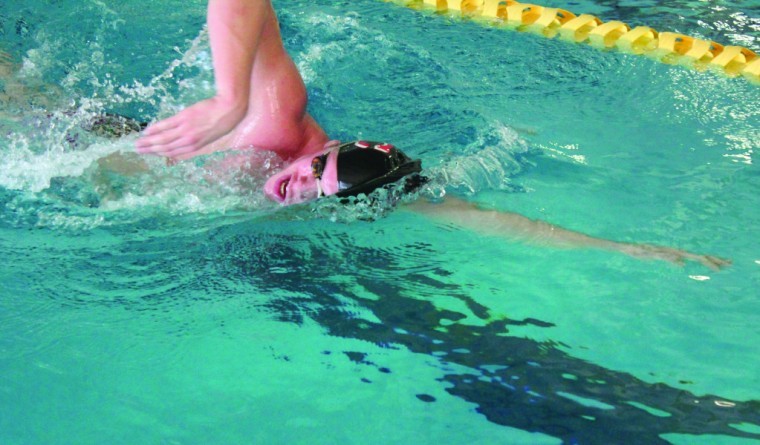 by David Adams and Tyler Craig

The Simpson College men’s and women’s swimming teams face a challenging season with only two wins for each team, but the young teams have made progress.

Head coach Aaron Strain realizes that it’s hard with such a young team, but he is optimistic that the team is full of young leaders who have stepped up.

“Since we don’t have very many older swimmers with experience, the younger swimmers don’t have someone to look after and follow, so they have to blaze their own trail,” Strain said.

Freshman swimmer Megan Lein sees herself and other freshmen on the team as good leaders. They have been forced to step up since the women’s team only has one senior and the rest of the team is made up of freshmen.

They have had some bumps along the road, but the one-on-one coaching they have received has paid dividends in their development.

“Not having very many upperclassmen has been tough, but we have good freshmen captains who are also very good leaders,” Lein said.

Freshman Steven Schmidt has been recognized as a leader by Strain and his fellow teammates, and has broken several school records on his own and expects to continue his streak.

“I show my teammates that I am going to show up every morning and put my best into every meet,” Schmidt said.

Strain said he looks forward to the rest of the season and has set a few goals for the team. Although the team has already broken a number of school records, Strain’s goal for the season is to break every relay record on both the male and female side.

The team hopes they will grow in numbers by recruiting and staying together as a group. The Simpson College swimming pool will be moved to the Indianola YMCA in the fall of 2013. The team hopes this will help with recruitment and add members to the team.

Moving into a new pool will be an upgrade in facilities the swim team desperately needs, since they have one of the oldest pools in the conference.

The current pool will be replaced by a two-story weight room and indoor track, which will also help several other teams in recruiting with the upgraded facilities.

The last competition for the Simpson men’s and women’s swim teams will be from Feb. 16-18 in the Liberal Arts Championship in Elsah, Ill.