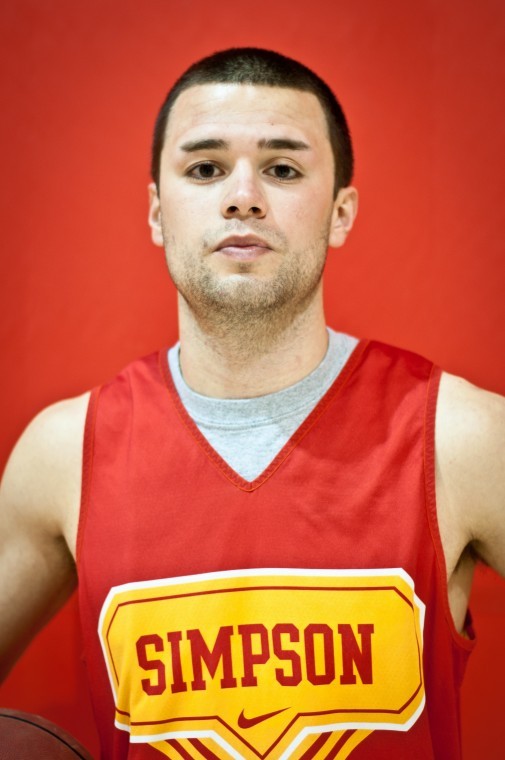 by Zach James and Keith McCarthy

Since he was one year old, senior guard Zack Barragan has always had a basketball within his reach. Through many practices, a myriad of shots, countless scrimmages and games, he stands alone among all Simpson shooters.

Barragan became the school’s all-time 3-point shooter on Jan. 11 against Buena Vista while the Storm clinched a 68-64 win.

Barragan needed seven shots from downtown in order to break the record, and on that night in Storm Lake, that’s exactly what he got. In the game, Barragan shot 7-for-9 from 3-point territory, 10-for-15 from the floor ending up with a season-high 27 points.

“It’s definitely a great accomplishment,” Barragan said, who broke Jason Parkinson’s record of 171 made 3-pointers. Barragan’s total is currently at 174 3-pointers. “It wouldn’t be possible without my teammates who find me and pass me the ball.”

The record only stood for five years, and for Athletic Director John Sirianni, it shows just how competitive an athlete Barragan is.

“Records were meant to be broken and the 3-point game has become integral part of the collegiate basketball game,” Sirianni said. “It is a tremendous feat for Zack and I think it shows his commitment to excellence.”

Barragan didn’t find out about his accomplishment until after the game.

“I thought I heard a couple JV teammates yell at me that I got it right after I hit it, but it wasn’t until we were in the locker room when most of the guys told me,” Barragan said.

As true competitors go, it wasn’t the record that satisfied Barragan, it was the road win over the Beavers that made the senior happier.

“The win made everything much sweeter,” Barragan said. “It was a much-needed win for us.”

One of Barragan’s teammates, who helps find him when he’s open, is junior forward Drew Bentley, who said that his work ethic is top-notch.

“He works harder than anyone else I’ve ever seen,” Bentley said. “He’s always the first guy in the gym before practice shooting; he leads the lifting workouts we have while in season. He busts his butt to get us all better.”

Junior forward Olu Rotibi has also noticed the hard work Barragan has put into the season.

“Barragan has put a lot of effort and time into this team and it’s nice to see it pay off a little,” Rotibi said.

Simpson head men’s basketball coach Charles Zanders, has given a nickname to the team leader for his hard work.

“We like to call him a warrior,” Zanders said. “He brings it every day. He works hard in practice, he works hard in the classroom; he’s extremely focused.”

Zanders also points out the level of commitment Barragan has brought to the team.

“He’s been here since day one,” Zanders said. “He has never stopped believing that we could get this thing rolling.”

Barragan hasn’t necessarily seen the brighter days as a basketball player at Simpson. In his first two years, the Storm won a total of 12 games. Since Zanders has taken over, Barragan has won 23.

“The wins and losses matter most right now,” Barragan said. “I would still like to reach the NCAA Tournament, and we all believe as a team that is a viable goal.”

Despite not getting as many wins as Barragan would like, he says the biggest takeaway from Simpson are the people around him who made him a better athlete and person.

“It’s been a blessing to get to know the people inside the program, especially those who do the dirty work behind the scenes,” Barragan said.

His coaches here at Simpson, which includes former head coach Bruce Wilson, have made an impact in Barragan’s life.

“Bruce taught me a lot,” Barragan said. “I thank him for giving me the opportunity to play here and when I came, I knew I was going to be a good fit because of the system that Coach had in place.”

However, it’s not only the people from the Simpson community that Barragan acknowledges. He realizes his support group ever since he was a little kid playing basketball was strong. Along with family, Barragan recognizes his coaches from Ankeny who gave him the opportunity to start when he was a junior.

Zanders has also known Barragan since his Ankeny days.

“Zack would come to camps that I worked at while I was at Hoover,” Zanders said. “I’m honored, privileged, and I couldn’t hope for a better player to inherit than Zack Barragan.”