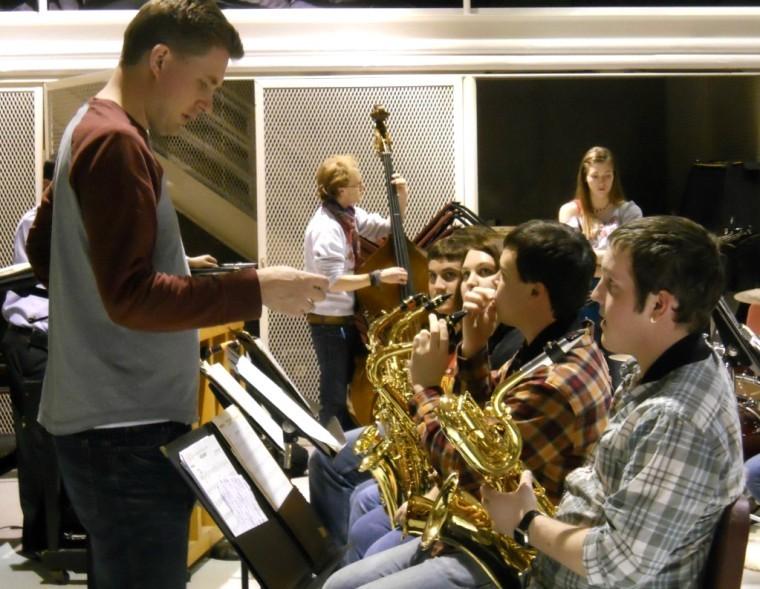 Simpson’s music department is hosting a Jazz Festival on Jan. 26 and 27 in Lekberg Hall to recruit musicians to add to the program in the upcoming years.

The music department’s Jazz Festival has been helping raise high school students’ awareness of Simpson for six years and continues to keep their annual event going.

“This event is one of our main recruiting pushes,” said Dave Camwell, associate professor of music. “We typically have our posters go out to close to 400 high schools across Iowa in the fall, usually in October. We just take it first come, first serve. Whoever gets their check and registration form in we’ll take them.”

The Jazz Festival gives various high school bands the opportunity to perform and compete at Simpson while giving our music professors the chance to find recruits for the future.

Finding bands to participate hasn’t been a problem over the years. Many bands have often been put on the waiting list or even been turned down.

“It originally started as a one day festival with I think 11 bands and now we have a two day festival and we’re at about 32 bands,” Camwell said. “Really, we could easily go into three days and have over 40, almost 50 bands, but we don’t want to burn everybody. It’s a lot of work to put it on.”

With 32 bands performing and approximately 20 kids in each band, Simpson has a large number of students and family on campus.

“We probably have close to 700 students on campus throughout the two days and then in addition to a lot of the family,” Camwell said. “So easily we have over 1,000 people in the span of two days.”

The Jazz Festival begins each morning in Lekberg Hall at 9 a.m. and goes until around 7 p.m. Each band is given 30 minutes of warm up time and 30 minutes to perform on stage in front of the judges.

The festival gives high school students the opportunity to receive feedback from three professional jazz musicians: Eric Richards from the University of Nebraska Lincoln , James Bunte from the Cincinnati College Conservatory of Music and Mr. John Kizilarnut who is a music educator based in Des Moines.

“These guys are all great teachers, but they are also great performers,” Camwell said. “They do a terrific job.”

The students also get the opportunity to see the Simpson band perform three songs with those professionals after all the high school bands have performed.

Having the Simpson students perform is a way to show high school prospects what Simpson music is all about.

“It’s a great opportunity not only for high schoolers to see a college band, but also see them playing with the professionals,” sophomore Katelyn McKone said. “They get to see the kind of music they can expect to play in college.”

After the Simpson students perform, awards are handed out to those in first, second and third place in each class.

“It’s really nice experience and opportunity for everyone,” Camwell said. “The crowds are always very enthusiastic; it’s a terrifically fun environment to play in. Everyone’s amped up to see who is going to win first prize.”

Camwell hopes that the high school students see the festival as more than a competition.

“Anything music shouldn’t be about simply winning or an award it’s really the journey of the destination,” Camwell said. “Its much less about the awards than it is learning.”

The Simpson students and faculty look forward to having another successful year at the Jazz Festival.

“We just want to run as smoothly as possible,” Mckone said. “We don’t want any angry band directors, just want to make sure everyone is happy and that they have a good experience here so they come back next year.”

Since current music students were able to participate in this event years ago, they hope to see the Jazz Festival impact the high school students like it did when they were in those students’ shoes.

“I think the Simpson College Jazz Festival is a great event,” senior Ryan Runyan said. “As a volunteer of the event and a former participant, I can say that it is a lot of fun and a great opportunity to meet and interact with other musicians. The festival was also one of the reasons why I came to Simpson, so it is proven to be a successful recruiting event for young aspiring musicians.”

Simpson music students and faculty hope to see some support from their peers around campus this Thursday and Friday in Lekberg Hall.

“I encourage everyone to come check out the event,” Runyan said. “There are a lot of great bands that play and the music the high schoolers are capable of playing is impressive.”