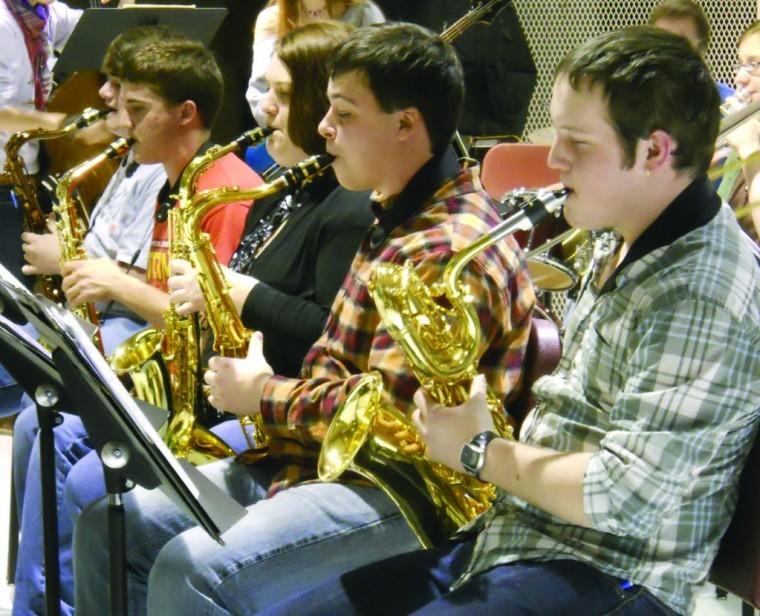 The Simpson music department hosted the sixth annual Jazz Festival on Jan. 26 and 27 for high school bands in Iowa.

“The festival turned out very well,” senior Ryan Runyan said. “We did have a band scratch due to a school delay, which is very unfortunate, but things ran very smoothly and those who volunteered to help were present. I would like to see a repeat performance next year with a few of the kinks worked out.”

Ben Thompson, associate director of band at Pella High School, had positive comments about the festival as well.

“It was great,” Thompson said. “The clinicians were pros. I mean they were masters of their craft for sure, all three of them. It was very well organized. We made due with the limitations of the building, all the stairs and elevators and what not. But the kids had a great time; it was very educational, they learned and they got to have a lot of fun.”

The music department was able to see the various high school bands and the talent they brought to the competition.

“I was pleased that these high school bands, even the small 1A bands had very talented musicians,” sophomore Katelyn McKone said. “The competition was tough and I think all of the bands learned something from their performance and comments from the judges.”

McKone said each band took something away from the Jazz Festival, even if they did not receive an award.

“Even if a band didn’t win a trophy they all were given comments and criticism from the judges,” Mckone said. “They all receive a recording of judges comments, their performance, and a ballot which is basically a report card telling them how they can improve.”

Having a young band, Thompson enjoyed the feedback his band was given from their judge. Thompson felt hearing what they need to fix from a professional musician is the most beneficial part of the festival.

“Our biggest struggle is finding a group pulse; you know everyone being together at the same time, feeling the same rhythm,” Thompson said. “They call it ‘being in the pocket.’ And we have hard time with that just because we are young. And John Kizilarnut, he was our clinician, and that’s what he focused on.”

Thompson finds the festival to be more than a competition, but also as a way to open the eyes of students to the music they play.

“The whole point of even doing jazz band in the first place is to teach the kids this truly American art form and expose them to music that once was popular that you don’t hear on the radio anymore,” Thompson said. “And those kids that get exposed to it really tend to love it, and it’s events like the Simpson Jazz Festival that help kids want to be involved with groups like this.”

According to Simpson alumnus Bryan Lloyd, the instrumental music director at Woodward-Granger Middle School and High School, the directors look forward to returning to each year’s festival just like the kids do.

“As Simpson alum, I am proud to bring my students to campus for this event,” Lloyd said. “They always have a wonderful time and have great things to say about the festival. I look forward to supporting the college and this jazz festival in the future.”

Thompson, another Simpson alumnus, enjoyed coming back to campus and showing his former professors what he has done since graduation.

“My biggest highlight was coming back to Simpson and playing in front of my old band directors and getting to see former professors that are now colleagues and friends and getting to show off a little bit, you know what I do,” Thompson said.

And for Thompson, the Simpson-Central rivalry has continued even though he is a director in Pella.

“I loved Simpson while I was there, I still love it” Thompson said. “It’s just always neat to be back on campus. And it’s fun taking a band from Pella, skipping the Central Festival, and coming to Simpson is always a good thing.”

Thompson’s band has attended the festival for two years now, but he has been familiar with the Jazz Festival since it first began.

“Actually my buddy Mike Fisher and I, when we were seniors, we started this festival in 2006,” Thompson said. “We organized it and we executed it. Basically all the college did that first year was just give their blessing and we just kind of took it and ran.”

The Jazz Festival has come a long way since it started, according to Thompson, and hopes it continues to grow here at Simpson.